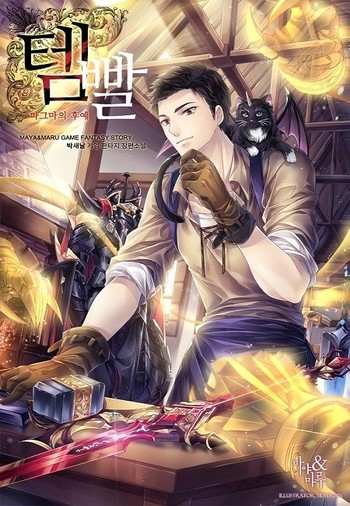 Overgeared is one of the best web novels I have ever read so far. The chapters are decently long, as it has taken me nearly 3 weeks to get to chapter 860 (this includes manhwa chapters). I definitely recommend this to anyone wanting to read a web novel. The only downside is that the main character has a scummy personality until around chapter 90 (approximately chapter 40-50 in the manhwa). However, do not be dissuaded by the initial terrible personality of the MC; through the many experiences he goes through, he slowly and surely develops into a true king and godly fighter.

This is a RPG-style novel that focuses on the adventures of the characters in the virtual reality game Satisfy. There are many fight scenes, excellent characters and character development, enjoyable scenes and comedy, and the MC gains a harem consisting of real-life women and NPCs :)

Overgeared depicts the story of our main character Shin Youngwoo in the virtual reality game Satisfy. Youngwoo is a 27-year-old man who only spends his time playing games, giving his parents and younger sister the trouble of having to take care of him. He barely made it through university, getting in debt. When he was younger, he was subjected to constant bullying by his classmates. Youngwoo was the definition of a 'loser'. Like many others, Youngwoo strives to play Satisfy to gain money to get rid of his debt. His personality, as a result of going through many hardships in life, is initially pessimistic, irritable, and annoying. Even his in-game character is trash; it took Youngwoo around 1-2 years to reach level 80 while the level of popular users who have been playing for the same amount of time is in the 200s.

Youngwoo, who goes by Grid in the game, stumbled upon "Pagma's Rare Book" during a quest, which changes his class into the first legendary class in the game of Satisfy, "Pagma's Descendant", a blacksmith-focused class that can create countless overpowered weapons. Grid takes advantage of the blacksmith capabilities of his class to become "Overgeared", a person equipped with overpowered equipment, weapons, and armor, making them as strong as players with godly gaming skill. Overgeared follows Grid's adventure as a legendary blacksmith and overgeared person in Satisfy, as he starts to become stronger and stronger, while opening up to others for the first time due to becoming strong and amassing a strong force of players and NPCs behind him.

As the novel progresses, the world of Satisfy starts to become developed by the author. Mostly all side characters introduced are interesting and worth reading about, and the world building displayed in the novel can be compared to One Piece. This is a novel that highlights both the growth of Grid and his friends. The fight scenes in this novel are pretty exciting. There are lots of instances where Grid is doing blacksmithing-related tasks, however those scenes are not dragged out for long.

Overgeared is definitely worth the read. It has a loveable cast, an overpowered main character going through serious and beneficial development, enjoyable comical elements, hype fight scenes, interesting side characters, exquisite world building, and of course the MC gets a harem :))))

The story you never want to end, and it pretty much doesn't. If you like OP MC's, harem and MMO RPG then this is the perfect read. I haven't used any form of entertainment, other than reading Overgeared, for the past two weeks.

Read up to chapter 1000+ before I just had to log in and leave a review. I sincerely want this novel to reach more people. It's that good. The MC goes through one of the best character developments I've read that it makes you genuinely proud of him. There are very little dull moments to the point that I've been reading nonstop for a few weeks now. This isn't overrated. This deserves the perfect score.

Honestly questioning if I prefer this over The Beginning After The End, which is/was my favourite novel. I picked up from around chapter 170ish as I started by reading the manhwa, so I can't comment from the start (although given how good it is I might re-read it from the start later).

The chracters are all distinct and fleshed out and rarely feel like "side characters". The MC has one of the best character growths from being selfish, greedy, and frankly stupid to someone who is reliable, strong, and charismatic. He is not OP - to an extent. He gets to a point where he's pretty much the strongest known player, but his opponents aren't just players. The NPCs are stronger and some of the players can beat him in certain conditions. He's annoying at the start but watching him overcome his deficiencies and growing is a joy.

The story doesn't get boring and feel like a filler, unlike some novels (e.g. Mushoku Tensei). In fact it keeps picking up pace. I spent a month binging to get to 1450 chapters reading 8-10 hours a day because the story was always gripping. Besides feeling hollow now that I've caught up and have to wait, I enjoyed every chapter and it always made me want to keep reading.