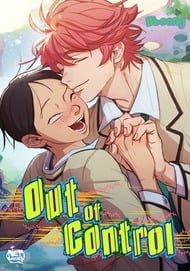 Romance in comics is usually about a normal person trying to be close to the most beautiful guy/girl around. Not this time. In Out of Control, a shounen-ai, the goal is to see if a relationship between the best guy in school (sports, grades, beauty) and one of the ugliest (with serious self-esteem issues) is possible and can work. Plus/minus considerations: STORY: what I like the most is the "originality" in a relationship between the best guy around and the bullied ugly kid. Why do I quote-unquote originality? Because there are some other cases, but let's act like this relationship is one of a kind, since Out of Control is well narrated. I feel like this manhwa is inconsistent due to the urge of adding side-stories that, apparently, so many people loved: I thought those side-stories were an efficient excuse to buy time to continue the main story and let the reader know "this is what you can expect, just wait a little more" without them losing interest in a shounen-ai with no fan service up to that moment. The background story is simple but effective and I feel like this is one of the biggest reasons why Out of Control has been so successful. (++) ART: I personally don't like the art style because it looks like the expressions shown by all characters are a display of emojis not only to add that comedy touch, but also to cover a superficial effort in a type of drawing that could've been way better. I know, this is my opinion so please don't take it personal and don't think "OMG YOU DON'T UNDERSTAND! IT'S HER/HIS STYLE!" and just shush (or comment below if you agree/disagree). As I said about those emoji-style faces: they're refreshing, yes; but when the joke gets repetitive it's not funny anymore. (-) CHARACTERS: Main characters are well written, I have nothing bad to say honestly (not that I was trying to before). They live up to the expectations and their background stories, their attitudes and the way they handle things are remarkable. Characters progression is key, props to the author. About the secondary characters that appear in the side-stories: I understand why they're there because I talked about it already, but I could've lived without them just fine. (++) I personally don't mind the story and characters because they're both well written. I feel like this manhwa, especially in the central part, is inconsistent in both narration (introduction of side-stories to get fan service out of the way to sedate horny readers) and art style (emoji and sketches too repetitive at some point). Also I felt like it took an eternity to finish this read, so I'm not happy about it. Overall it's not a bad title. If you enjoy shounen-ai, this is well written and should be able to entertain you.

Just fucking love it. Heart-throbbing, heart-warming, beautiful story and art. Everything that I look for in a Manwha. Everything about this manwha, I love. The side love stories were meh but the MAIN story is the deal. Yuri and Jaerim is by far one of my favourite couples in all romance genre. They SAVE each other. Not those weak and typical save me ukes/heroines, but I'LL SAVE YOU type. Which I need more! I wish they gave us a proper clousure about the story. What I mean by that,  *FROM THIS POINT ON* IM TALKING ABOUT THE STORY *SPOILER* The side stories, Sorry! I don't know the names but you'll know who Im talking about. The archery guy and the narcissistic guy - I really have mixed feelings about this myself, because, what? Both of them like each other's looks only? Like, I was angry at the N guy for saying such horrible things to A guy in the pass for being fat and now A guy slims down and the N guy is all over A guy now for his better looking looks, but A guy can't say much for himself because his no different, A guy fall for N guy looks too so how can I say bad things only to N guy? AND there was no proper closure on this pair. Did A guy ever told N guy about the pass or even plan to? IS LOOKS the only thing they care about? IS THAT even true love? What is the real reasons? Anyways, of all pairings, these two are my least favourite. \_(ツ)_/ The Ex president and Yuri's Childhood Friend/Step Brother(Not blood related nor in papers) - Another pair which I don't get, EX-P fall for YCF/SB because YCF/SB saw through all of EX-P mask/bullshit and EX-P couldn't? So, EX-P want to know more of the person that saw through him and finding himself in a bind, opening doors after doors to only find out that the person he was so in love with was actually in love with someone else(Yuri). Angered, he fked around with my baes because he wants to lure out YCF/SB.┌∩┐(◣_◢)┌∩┐ Well, in his defense, it's YCF/SB who is fucking around with him. Dick move. YCF/SB is complicated with his feelings but to fuck around with someone else heart is not cool. I feel for EX-P here but there must be a story why YCF/SB is like that. Yet another pairing with no proper closure. What happend to them after the kiss infront of everybody? Does YCF/SB treat EX-P as a Fuck buddy to see him break out his normal composure because he finds it interesting? Does YCF/SB even like EX-P? What made YCF/SB like Yuri so much? Will YCF/SB ever move on? Are YCF/SB and EX-P still together? ┐( ˘_˘)┌ Thus, making them my second least favourite pairing. The bully and otaku - This one, the otaku is too forgiving 凸ಠ益ಠ)凸 I mean, good for you for being kind and shit but bruhhhh. Well, it ended good enough so, be happy the two of you (๑˃̵ᴗ˂̵)و . At least, this pair got some proper ending. Current president and the The short bowl cut girl - Is something going on between these two? SBCG gave Jaerim these weird look in one of the chapters but that's it. ARGH ┗[~▿~]┛ Yuri's No.1 sasaeng fan and Fucking Hot Black Hair Guy(Ayy Papi) - BITCH, if you like someone so damn much to the point you pull all sorts of stupid stunts AND YOU CAN'T EVEN CONFESS your feelings? ヽ(＿ ＿ヽ)  DAMN GIRL open you damn eyes, YOU GOT A HOT MAN RIGHT THERE, mind you. Damn, may this be my own opinion, but that papi is better looking than Yuri. (♥ω♥ ) ~♪ Back to the point, that huge misunderstanding with One-eye-Green guy and Yuri IS YOUR DAMN FAULT. But, then again, if she didn't do it, I wonder if he would have encounter Jaerim like he did. BUT THAT DOSENT JUSTIFY WHAT YOU DID. Anyways, at the end of the manga, it showed that Papi moved on and dumped that bitch, despite him wanting to give it another try. (How do I know he wanted to give her another chance was when Jaerim told him while talking about Yuri that if you love someone, you gotta love their flaws too. Which got him thinking.) But, I think he decided not to because she blew it with her rape/record and let yuri misunderstand scheme and her last outburst made it clear to him that she is no longer is the same girl he used to know. Dumping her, no more Papi Protect, hence, she got what's coming to her. Maybe then, she'll open her eyes? Now to the questions, Did Papi fall for Jaerim or what all he did was all an act or half-half? What made No.1 SF fall so damn deeply for Yuri to the point of madness?(Just looks? FFS) Will these pair get another chance in the light? (I really do hope she turn over a new leaf) MY BAES(the only names I know) - May one day I get blessed with a love scene(you know what I mean ladies) from the two of you. Thank You Jaerim for persevering the hurt and beliving in Yuri and guided him to the right path like a bull as you said. Thank you Yuri for not giving up despite the horrofic events you had to go through. ೕ(⁍̴̀◊⁍̴́ฅ) To the author, Thank you for such an amazing story. -End of long ass review- ٩(ര̀ᴗര́)

FUCK MAN!!! they could've turned this bitch into something cute but they had to go fuckin freaky mode. i loved this at first, it was cute. the red haired dude was so stubborn, I LOVED THAT. then suddenly the next chapter he was ALL SOFT?? like not even 1 chapter wenr by. NO. CHARACTER. DEVELOPMENT. the main black haired nerdy guy stayed the same, which is fair if your bad at character development, but to just straight up switch one of the main love interests? really? the story is fuckin weird, i didn't read it for long before i saw how weird it was getting, so i git creeped out and dropped it. it felt like the red haired dude was seatching for his old lover in the black haired kid, it felt like their love was fake and unrequited. even though it looked like they loved each other i couldn't get out the feeling and thoughts that the red head thought he was someone else. the characters were alright at the begging, but after the red head switched it all came tumbling down 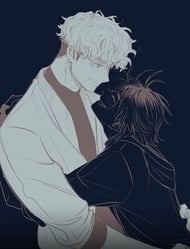