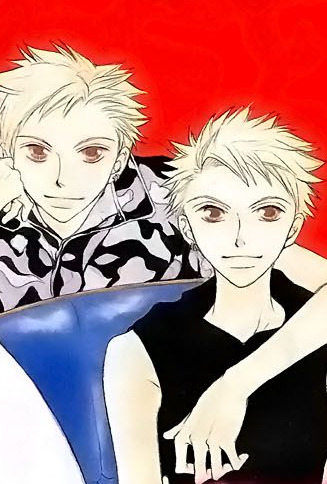 If you're looking for manga similar to Ouran High School Host Club Short Special, you might like these titles.

Yuuchi is a girl that has a passion for art.... or rather, HAD a passion for art. Because of her mother, Yuuchi had to give up her talents and love for painting. Still, she had made a promise to her baseball-loving friend, Natsu, that she'd paint a picture of him. With all hopes lost for her dreams, Yuuchi now must find the "hope" within herself to continue.

How does a washed-out, child genius actor confront his fears? Faced with the fear of never surpassing the acting of his greatest nemesis, he idles away while his childhood mentor and director recovers in a hospital. For five years, he sits idly, wondering what it takes to be a good actor. That is, until the day he met her...

Kensuke and Minori have been best friends since they were children, and live next door to one another. They bicker like an old married couple and talk to each other about everything, but recently Kensuke has become flustered when Minori has mentioned the boys who have confessed to her. Could Minori's childhood friend have feelings for her, and even more importantly, could she have them for him as well?

"Kawaii”... Eve has come to hate this word. "Kawaii" has ruined her life and made her a social outcast. Yet she still has hopes Niikawa will return her feelings for him, that is if the rowdy class idol Kashii doesn't spoil everything first!`

After her grandmother passed away, Tsuji Ayame became all alone. She is offered to be taken in by a relative, but meanwhile, strange things keep happening!

Non-chan has never been able to catch up to top stylist and childhood friend Omi. Following in her father's footsteps, Non trains hard at the Jisen Sougou Beauty School. Clumsy and headstrong, will Non-chan be able to triumph as a hair stylist and find love along the way?

Yuuka has always had the hots for her classmate, Suzuki-kun, and tried to kiss him to show how she feels about him. However, when the chance came, she kissed the arrogant Makita-kun instead! She has always hated Makita, and they quarrel a lot. What will happen now that Makita thinks she liked him?!

After botching a job, Mag the Thief meets a priest intent on reforming her ways.

Nozaki Momiji hasn’t been designing clothes recently. Tani-sensei worries that Momiji might be in a slump, so she makes her student participate in a school fashion show against Momiji’s will. Tani-sensei introduces to Momiji an upperclassman named Miyata. He’s a very attractive young man that he could make a girl drool with just a glance. He makes a wonderful model, however, he wears nothing but a muffler! Now Momiji doesn’t only have to design clothes for him, she’ll also need to make him put something on!

A girl from Osaka, Chisato, makes a trip to Tokyo to where her brother lives to look around the city--for Tokyo men just like in the dramas. But at her brother's home is...?