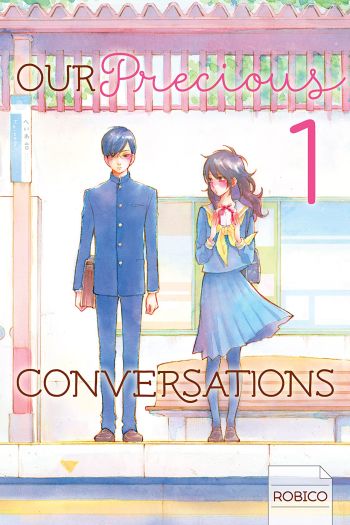 Thoughts about Our Precious Conversations

Our Precious Conversations is a good manga. One could even argue it's a great one, and very easily deserving of an anime adaptation. The premise was very interesting, and the execution was even more impressive than what'd you'd expect it to be. The highlights of the book were not brought down by it's flaws, mainly the lack of a good supporting cast. While the story itself was good, though a bit sluggish due to the slice of life pacing, not a single time were the supporting characters really important to the overall story other than a few instances. That's not to say they aren't good characters. but there's nothing to write home about them either. The main stars of the show are the main protagonists, and rightfully so. They were wonderfully cheesy, and while the male protagonist's obliviousness did hinder the progression of the story, it never made the story much less enjoyable. The most relatable character was Aizawa, the female protagaonist, and easily the best part of the manga. She was just a pleasant character, and perfect for a shoujo. Overall, Our Precious Conversations is a pleasant read. With a good story, likeable characters, and some beautiful art, it's hard not to recommend.

Our Precious Conversations is a realistic high school romance manga about a girl who approaches her crush and asks him a question “Why is it that boys like to fight so much?” and thus begins interactions involving debates and rants on various topics.

Aizawa likes to keep to herself. She's oblivious to he beauty and her popularity at school. She is very confident in what she likes and she doesn't follow the tendencies of others. She spends her days admiring her crush Azuma. Azuma is a glasses-wearing bookworm and contrary to his appearance he isn't a very good learner. Azuma is cynical and has very strong opinions.

The side characters aren't developed much but they're all likeable. There is a bit of a hindrance to the story due to Azuma's obliviousness to Aizawa's feeling. But I enjoyed reading this manga it felt very original and realistic. I would definitely reread it.

I recommend the manga if you want to read a realistic story about two high schoolers falling in love.

The best shoujo i've ever read so far, both characters are so funny and real, there's no cringe anime things that makes me fell a litle bit angry, is just two normal high schoolers that have feelings for each other, is a good romance with good development and a good comedy, I recommend for everyone that likes romcom, even some shounen fags friends liked this manga, 10/10.