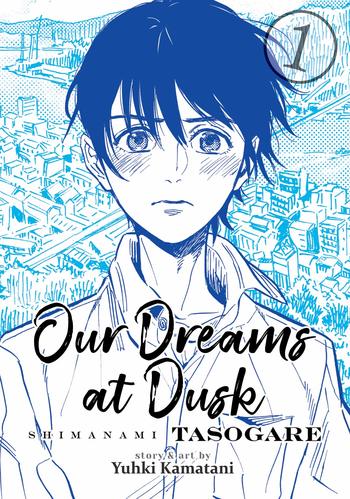 Shimanami Tasogare is a manga that truly brings light to what it means to be LGBT+ in a country that's mildly unaccepting of it. Despite only being 23 chapters long, we, as the readers, get to see a huge change in the characters that we're shown and though the ending was a bit rushed, this manga was absolutely stunning in art, amazing in it's characters, and even though the plot wasn't the best, it still worked. Shortly, I believe that it's definitely worth the read.

Now for the elongated version of this review:

The manga isn't for everyone. That's definitely true. It's heavy on themes like homophobia, gender dysphoria, cis people being, well, cis people, but the LGBT character are never shown in a horribly bad light. Not only are the characters are allowed to be themselves, they're allowed to make mistakes, like with Tasuku and his crush. I love Tasuku. He's learning to accept himself, learning to accept others and beginning to understand what the other people in the community feel. He's trying his best, and as a reader and member of the LGBT community, I feel for him. He's an extremely relatable character that made you proud in those perfect little moments of the story.

This manga doesn't just focus on gay people either. Trans characters, genderfluid characters, lesbians, even those who are asexual or questions-- they're all welcomed by this story and truly brings out a nice feeling. These characters become a family, a true showing of what Pride means to all of us. It's amazing.

The art is amazing, too. There are scenes where you will just have to stop for a moment and just look at how intricate and beautifully drawn the characters are, the background, the scenery. Everything just fits together and brings this manga to a wholesome closing.

In other words, you should all read it. You won't regret it.

My favourite manga. Wonderful to read. Art is really beautiful.

Deals with a lot of LGBT+ issues realistically and almost all of the characters are part of the LGBT+.

Made me very happy, sad and seen at times. 100% reccomend.

Made by an agender (x-gender) author.

Similar to Antique Bakery, Shimanami Tasogare discusses all of life's tough topics such as discovering your sexual orentitation, coming out, dealing with loneliness and death. The character's artstyle is European-like and there are plenty of pages dedicated to Onomichi's beautiful scenary. The way reality blends with young Tasuku's imaginary mind creates some fazey storytelling, almost dream-like. Tchaik-san's story was my favorite and helped me better deal with that topic.

A delightful, insightful, respectful representation of what it is like to be gay (in the umbrella sense) at many stages of life, in many different circumstances, and with many different goals. This series mostly focuses on a young high school student and his coming of age tale as he not only recognizes and confronts that he is gay but also comes to accept and love himself. (Spoilers of later chapters!) There is also a representation of a lesbian couple which brought me a lot of delight and laughter in their accuracy. Also the tale of a transgender man, an elderly gay man and his partner, a young child whose gender identity is up in the air, and a wonderful asexual woman. Kamatani also weaves visual representations of complex feelings and reactions that are hard to put into words but are beautifully represented in picture. I have great admiration for this work.

This is of the best mangas with a LGBTQ+ issues I have ever read. Explore different sexual identities under the rainbow through their family, social, self and love relationships.

But I do have a complain, the end was kinda unsatisfying for me 😭 those kids deserved love, they were perfect for each other . .  But this wasn't about romantic love, was more about accepting and loving yourself I guess ☺️