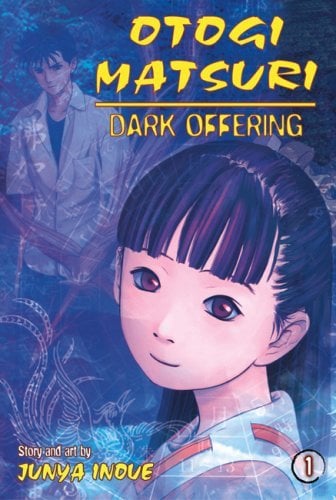 Kensuke Nimura has always been able to see spirits, but he never expected to find himself helping a girl named Kagura who battles evil spirits with her spirit beast, Byakuei. As it turns out, she's a member of the Ministry of the Environment's top-secret Occult Disaster Response Agency, and she's out to recruit him, too...

Ga-rei and Otogi Matsuri are two titles that won't make it to your top 10 manga of all time, that's for sure. What they can give you is an amazing show of drawing skills from two great mangaka in drawing not characters (they still can be appreciated), but original, and detailed monsters, ghosts, spirits. Yes, they're both action manga, they're both violent. But the talent shown in drawing these creatures is something you don't see often.

Kamunagara: Rebirth of the Demonslayer

Kugaya is a teenager who lives with her aunt, Sakura. The kendo coach at his high school, Narugami, has been after him to join the kendo team; but when he meets the new girl, Takemi, his life takes a supernatural turn and he is thrust into an epic battle with the demonic Intruders.

The story focuses around Makoto, a student whose talent is making stuffed toys. He starts researching the mysterious disease going around called 'Sudden death' after finding out that his latest creation looks like the mysterious stuffed rabbit rumoured to be causing it.

Sometimes to fight a monster, you must become one!

Georg and Riselotte are not your typical brother and sister, the former’s a priest and the latter’s “alive” by way of…darker methods. As a result, Rise is stuck in a child-like body. Georg immerses himself in research to free Rise from these chains.

Miho, a woman of beauty, intelligence, and temper, comes to Cheju Island to teach school and is immediately flung into a world of terror and the supernatural. A demon attacks her, and she is saved by the chance appearance of a mystery man with seemingly only one mission: demon killing.

Do you have a grudge against another soul? Would you like them to suffer painfully in the worst way possible? Creating and harnessing the power of an inugami may be just what you need. Created by starving, decapitating and boxing the head of a dog, these supernatural entities can carry out your bidding. However, often other spirits and shikigami have the power to defeat even the inukami. And above all, a powerful man known as the Inukami wanders the land, witnessing inugami use and carrying out deeds of his own...