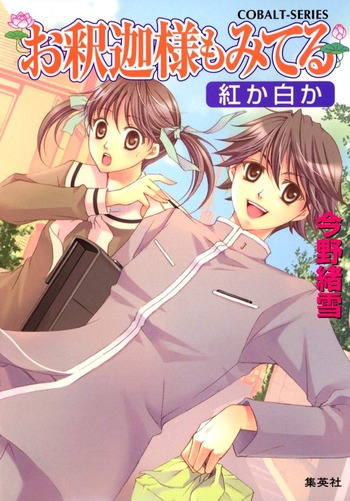 If you're looking for anime similar to Oshaka-sama mo Miteru (Light Novel), you might like these titles.

We follow the lives and turmoils of seven outcasted 17 year olds and you--the protagonist. Between the aches of being a girl who's younger than her body looks or a boy who'd rather get into fist fights than give handshakes, we found a piece of ourselves within the outcasted teens that's abnormal. Like a four leaf clover. Which are said to bring luck even though it is a mutant in the sea of three leaves. And so the curtain rises to glimpse at these four leaf Clovers--4 boys and 3 girls.

Ayano is sick, and only a special operation can save her life. But the procedure has a very small chance of succeeding, and the girl has sadly accepted her fate. However, Ayano's friends Nene, Reina, Kaori and others are determined to change the teen's mind so that she may become healthy once more.