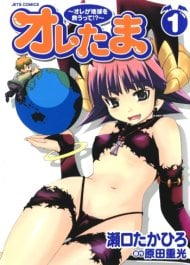 Alright, alright, alright. I'll do my best to stay away from puns while writing my considerations. Oretama a.k.a. My Balls is an ecchi harem manga with a loooot of borderline-H panels and a great, great, great sense of humor. Balls are love, balls are life. But why is it called like that? Because this manga is balls? Nah, quite the opposite, because this manga is nuts!! Actually there's a specific reason behind the name and, before I go ahead, I just want to say that this mangaka is a genius just for the idea of this. Plus/minus considerations: STORY: the Queen of Terror wants to destroy Earth and mankind so a monk dressed as a cupid, who's fighting her with all his might, tries to seal her in a Holy sphere. Satou, our protagonists is peeing right at that moment and finds himself caught in the middle of the spell or exorcism literally with his dick in his hands and the spell is reflected from the sphere, the Holy Ball, to his pair of balls, his testicles (this is genius). Now, in order to prevent the Queen of Terror from escaping, he can't ejaculate at all for 30 days. What's the problem then? Well, not only he's a big pervert and a virgin, but creatures and demons from hell will try seducing him (mostly forcefully, but with a great dose of comedy) to let the Queen free once again. This manga is hilarious to the point where you could go on and read all 41 chapters in one sitting, because this is just too good. This is Japan for you, guys. (++) ART: this manga definitely looks good, although it gets better and better the more it goes. I like a lot not only the facial features of every character, but even all the dresses and costumes. Hey! Don't judge me! I'm not saying this because they're almost naked, I really mean it! (++) CHARACTERS: big props to the author not only for creating such a funny couple of main characters, but even all the secondary and minor are great. There are mythological demons and creatures revisited in a parodical and sexual form that add a nice variety to this manga. I don't know about you, but I wanted to see more and more of these creatures because every single one of them has a different personality and different way of getting the "job" done. (+++) The lenght of this manga is good, because it doesn't get repetitive and you know from the start how long this adventure is going to last. The ending was good, maybe I expected something different, but that's personal preference. If you want to have fun with a great comedy and you like or simply don't mind the explicit content this is a must read that I will always recommend to anybody. Balls deep and go read it!

Best Manga EVER! (lol) No, but seriously, its been a while since I've actually wanted to finish reading one. The art was perfect, the story had a nice flow, and the best part was the ending (lol). I was very satisfied. (however you want to take that ;)