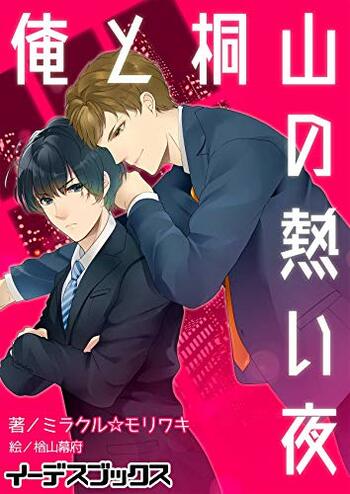 If you're looking for manga similar to Ore to Kiriyama no Atsui Yoru (Light Novel), you might like these titles.

Hazuki is honest, awkward and a member of the product planning department. Watanabe has the top business performance transfers into his department. Hazuki held animostity towards Watanabe thinking, he is completely different from me and he is attractive with a good personality. But ever since Watanabe invited Hazuki out to eat on the weekend, Hazuki goes to Watanabe’s house to eat hot pot and the private time that they spend together becomes fun. But, Hazuki learns about Watanabe’s secret and the relationship between the two starts to change…?

When I See Your Face, I Can't Hold Back

From childhood experience, Matsukawa believes that appearances are everything. He makes every effort to keep up his good looks in every way possible. His co- workers respect and look up to him. On the other hand, his junior, Chihiro, is naturally blessed with handsome looks. While Matsukawa is jealous of Chihiro’s effortless beauty, he recognizes his junior’s diligence and remains the supportive senior. On the other hand, Chihiro looks at Matsukawa as more than just his senior, and Matsukawa is not ready when things get heated fast. How can he even say no to a face like that?

Kubogawa is a crappy, worn-out salaryman. But then, one day, he discovers that he's lactating... he's grown manboobs! He puts band-aids on his nipples to try and stop them, but they just keep overflowing! And so, he sneaks into the bathroom and storeroom at work and tries to take care of them... until he's spotted by a younger co-worker! And it just so happens that this co-worker has a very unusual fetish...

Hideaki Shizukawa is your typical salaryman, aside from the fact he has a split personality. The real trouble is that they don’t get along. While mild-mannered Hideaki works by day, “Kairi” parties by night, seducing men and bringing them home by the dozen. Hideaki wakes each morning with no memory of the night before, but figures out what’s going on by the hundreds of pictures Kairi leaves of his sexual escapades. To make matters worse, the pictures keep ending up on the internet. Hideaki goes to the office counselor Katsuragi for help, but Kairi seems to be getting in the way. Will Katsuragi be able to reach Hideaki’s true self, or are deep wounds from the past too much for even love?