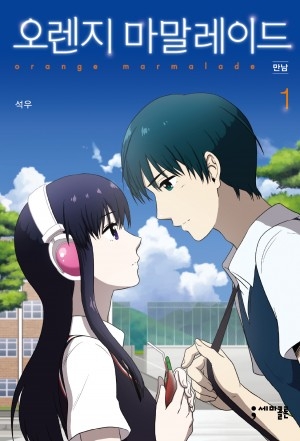 People are no longer afraid of vampires, but they discriminate against vampires. Mari Baek is a vampire who tries to hide her identity, but what if she falls in love with a popular boy like Jaemin, who hates vampires?

Spoiler Free-ish section. Read further for spoilers. Story- Typical vampire love story, where vampires are seen as monsters and have to hide their identity in society. This archetype was built up rather well and can be distignuished from other vampire stories (yes, like twilight). Overall plot, boy/girl meets girl/boy and drama-filled interactions ensue. Art- Amazing. Well done and the amount of effort put into the drawings is fantastic. Kudos to the author! Nothing but praise from me! Characters- A mixed bag of emotions from me. Some of the characters offer interesting points of views and interactions with other characters. However, as the series progresses, some characters fail to change or suddenly pull complete 180s and leave you with a sense of whiplash. Male lead is rather annoying and could have come off much more..... just more. The female lead while likeable, took much too long to grow out of her shell and into someone beaming with confidence. Overall- After reading this manga (manhwa?), I am glad to say I have read it. And yet, I still feel a sense of bitterness when I recall it. A bit of good with the bad. On one hand, I feel happy for Baek Ma Ri (female lead) and on the other hand I feel like the end situation turned out in a way that should never have happened. Spoilers!!!!!!!!!!!!!!!!!!!!!!!!!!!!!!!!!!!!!!! Jae Min (the male lead)- He's a dick... just a dick. Not only did he give off a grating feeling throughout the series, he literally told Ma Ri she was a disgusting monster and to essentially fuck off. Then at the end, gets back together with her. I am pretty sure most people don't get back together when something like that happens..idk that's just me. Baek Ma Ri- Again, while likeable, I feel like she could have gained more confidence in herself or built herself up more instead of getting beaten down all the time. I could understand feeling a bit of pity for her at the beginning, or rather empathy (nobody wants pity). But after a while I want to start rooting for her, not feeling sorry for her. She was also a bit naive (which is not bad, it is good to be optimistic). But when the entire school literally shits bricks on you (and by bricks I mean packets of blood--ch.115 or so), and then say they are sorry and that it was "kinda mean," you don't forget that. That shit is traumatizing. Side characters- blondie- an annoying bitch that has some saving qualities (at the end of the manga). woomi (umi? sorry korean is not my forte)- the girl with the glasses. I thought she was a solid friend until the end when she showed her true nature. Said she accepted Ma Ri for who she was and then says she is afraid of her when Ma Ri needed her support the most. What a hypocrite. Soori- By far the only decent person to befriend Ma Ri. A true bro til the end. Siwoo (white hair)- potential bad ass love rival candidate that turns out to be a heartless prick. While he did have some awesome moments, in the end he is still a prick. Chaerin- So disappointng. She was a solid friend through and through and then goes ape shit crazy at the end fucking over Ma Ri to the highest level of fuckery. There was no redemption in sight for her and it took Siwoo to go to her, slap her, and essentially take her away implying, "look, I am the only one that could ever accept someone as unforgivable as you so shut up and come with." People in general- I know as a society, people flip flop on their beliefs all the time, especially with the media over-hyping things and all. But sweet Jeezus O'laudy the hypocrisy is strong in this manga! First off, the amount of times Ma Ri and Jae Min go back and forth is ridiculous. With all of the cat n mouse shenanigans going on... in real life it's either two people like each other and things work out or they don't. Not this moody swing that goes from "liking" to "apathy" to "liking" to "hating" to "loving" and etc. On many occasions did people in Ma Ri's school go from having antagonistic views towards vampires, to divided views on whether or not they are really that bad. This happens with the singer who came out as a vampire--> this led to people seeing them in a better light. Then, when Ma Ri is outed as a vampire, the shitstorm that these people throw down on her was worth 150 years in therapy to get over. Then people "realize" that she wasn't so bad as a person and felt regret and apologized...... You think after all the shit they did and said to her, a simple sorry would suffice. When I read this I thought of WWII when someone reported a Jew to the Nazi's, had them detained and tortured, and stopped by a little later to say sorry. No way does a "sorry" relieve these people of the label they deserve--"hideous, monsters who no longer constitute a human being". Ending- Felt rushed. Ma Ri goes from trying to kill herself, to forgiveness of others, to dating Jae Min (for no reason, becuase he is worthless) in a span of 4 chapters. None of the fallout that should have happened from previous chapters was explained to played out. Just a time skip to happyville.

I enjoyed the story some times it was a bit cringe and cliche but I enjoyed. And we need no aknoledge that this is a shoujo, so is going to be cliche. It reminded me of Kimi ni todoke, very sweet and inocent. And the most importan aspect, for me, is a closed ending. I was pleased.