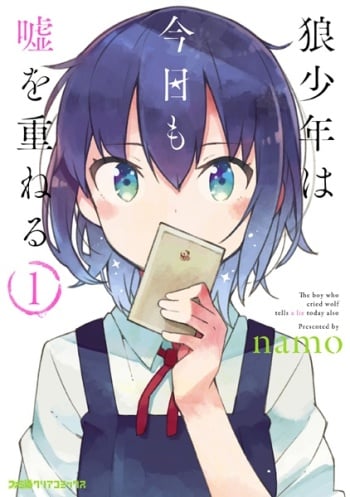 Keitarou Itsuki is a high-school student unhappy about the menacing look of his eyes. Keitarou tries to confess to the girl he likes, Aoi Tokujira, but she rejects him flat out. Thinking that his eyes were the reason why she rejected him, he confides in his older sister about it at her salon, who helps by giving him a complete makeover...as a pretty girl! Forced to head home like this, he runs into Aoi in town, but she doesn't recognize him and thinks he's a somewhat manly girl. Before he can leave, Aoi asks him to help her overcome a problem she's had for many years: an intense fear of men.

This manga is the first i read, but it was Quite fun so far. Because of this i am inexperienced with manga, so let's keep it short okay? Story: So far the story has been quite fun... normally i am not into crossdressing, but this was an understandable storyline! Also the story reminds me of the anime Working!!. You like this? Go watch it right now! Art: Again i can't say anything about it i am too inexperienced to review the art work :( Character: I am comparing this to anime..... It's really good! just a bit messy to read the textboxen but next to that.... GREAT character Devolpment! Overall: MAKE AN ANIME OUT OF THIS! RIGHT NOW!!!!1!!

Right off the bat, the parallel the story consistently tries to make between the boy who cried wolf and the protagonist, Keitarou Itsuki, is weak. This manga is based on the difficulty and guilt of maintaining a web of lies, while the boy who cried wolf is a story about someone who pranks people so frequently that eventually they assume everything he says is a prank. Yes, both stories involve lying, but there is a major difference between lying as a prank and what Itsuki is doing: pranksters want people to notice the lie because seeing the reaction to people realizing they were tricked is part of the high, whereas Itsuki dreads getting discovered. Also, the main point of the boy who cried wolf is that trust can be lost when you consistently lie and show no remorse for your lies and, again, this parallel is completely nonexistent in the manga. This manga was entertaining and cute and it kept my attention all the way to the end. The art is also very clean and crisp and all of the characters are eye-candy. Throughout the manga, you can see characters growing and relationships changing. Botan Kurashiki is probably the most interesting character. When she was first introduced, I thought that she would simply fill a stock friend role, sort of like Terayama and Osamu are stock friends for Itsuki. Or that she would perhaps act as harem fodder and fulfill some more ecchi scenes since Itsuki's interactions with Aoi Tokujira are very pure. But Botan ended up developing into possibly the only truly relatable character. This manga's in an interesting space because I definitely enjoyed reading it the first time through, but I can't imagine myself ever wanting to read it a second time. All stories are built around tension and relief and to a certain degree, whenever you reread a story, most of the oomph is gone since you know what's going to happen. But I have a theory that what makes a story worth rereading is when the tension doesn't seem artificial. When everything seems cohesive and when events seem to naturally lead to one another, then even if you know the end result, you can still appreciate the drama in the course of events. But when the events seem plastic and when tension seems to be included simply for the sake of tension, then rereading it can become tiresome. Unfortunately, this manga is loaded with this scripted drama. Tokujira or Botan will say things to Itsuki, phrased in such a way that no normal person would ever phrase things, but which creates dramatic irony since the readers realize that what they're saying would have a second meaning if they knew that Itsuki was a boy. And at times, characters will have vastly different opinions of the male Itsuki versus the female Itsuki which, again, creates a sense of dramatic irony. Also, Itsuki is thrown into various awkward situations because people assume he's a girl, but many of these situations feel forced. A good example would be, without going into too many details, the scene when Itsuki and Tokujira run into Botan in the back room of her family's bookstore while looking for "The Never-Ending Story." Or when Miyama falls in love with Itsuki-as-a-girl for reasons that can only be explained as the plot-god wanting the story to have more opportunities for humorous misunderstandings. As a final note, it annoyed me how Itsuki kept referring to crossdressing as a perversion even though he has loved ones who crossdress and even though after trying out crossdressing himself, he enjoyed it. Was this the author just trying to add another layer of tension: where Itsuki had to worry about getting caught? Or simply being unwilling to have a male lead who enjoyed crossdressing since that would be too feminine? The author hinted at Itsuki starting to get in touch with his feminine side, by showing interest in makeup and accessories, and feeling internally conflicted by this. I just wish the author had explored this area of Itsuki's character further.

Well this is my favorite manga which made my heart feel like pierced by gae bolg. Everything in this story is so beautiful ;though it is a little bit too short that make the story line unnatural. The plot is not new ,but if you dont be serious about it that much and absorb the feeling the writer gives to you then u will find the beauty of this story. My English isnt strong. Sry if it is hard to understand.