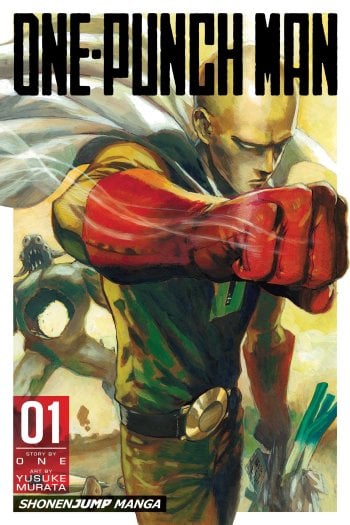 Story: One Punch Man is probably one of the most hilarious, Action-Packed and amazing manga's I've read in a LONG time. It's so entertaining and different. Usually when a story starts it's more built up to where the protagonist is becoming stronger but with One Punch Man it gives this sense of what if the Protagoist is already over powered and with that you would think it would be a boring plot but it's not! :D It's actually a really interesting story of "What can you do if your too over-powered?" Characters:(Some Spoilers) Most of the characters are very dependent one Power or rankings within the Super hero organization they have but with Saitama's character even though people may see him as "Weak" because of his apperence he is actually one of the most truest heros in that universe. Some hero's would only do it for rankings but Saitama never really cared about all that much he focuses on saving his town more than "If i'm Rank One in the Top Class I'll get lots of money and respect." He soon meet's people along the way and they realize that he is infact very stong and shows what it really is like to be a hero. Yusuke Murata Is one of the BEST manga artist of all time!

The Original Art is a different story though But I DEFINATLY recommend you read the Original Webcomic too :D

Overall: I think many people will enjoy it especally with the new anime coming out give it a shot and read both the Webcomic and Remake you'll love both. ^^ Sometimes the Remake does go a different path then the Original by ONE does so it's good to read both!

I don't really like doing reviews before the series is finished but this one i have to make an exception for. (I did the webcomic first)

This is like the Anime/Webcomic which i am glad, all follow the source material to the letter, and makes this series a cut above the rest. The lack of deviation is why the entire series is beautiful. This Manga is drawn by Yuusuke Murata a very well know artist, and fan of the webcomic. The comedic overtone and the really impressive fight scenes are at the heart and soul of the series. The introduction of class ranks and positions within the ranks; in-fighting and backstabbing at lower echelons is very intriguing. There really is no slow point in the series that i can recall, so the pacing is very good. In order the series should be done is: Anime-Manga-Webcomic. That way the story will drive you to stay with it. Well worth all the time you spend with it. Yes there was some copy-pasting here but it really is a very good series that should be in anyones top ten. Well as soon as we hit the Garou arc the following of the source material has now diverged, but it still is super good and a very good and surprising storyline.

This manga is poorly written and I can't understand why anyone would give it a high rating.

If you write a story, you can't just say "Saitama fought in a tournament. siatama won the tournament, the end". You have to draw it out, create suspense and tension. However, the way this is done in one punch man is just dropping the storyline completely and switching to another in a way that doesn't make much sense and leaves the reader wondering what's going on. The writer will just abandon the story and focus on something completely unrelated, and then he'll abandon that and write about something else. He changes from the main story to side stories at the flip of a switch. It's like he's severely afflicted with ADHD and can't complete a train of thought. I think the anime is better because the story has been fleshed out and editted a little better.

This manga is written for no other purpose than to nickle and dime the customer. A fight sequence won't lat a few cells or a couple pages, it'll drag on for 5-6 issues. And then another hero will fight for another 5-6 episodes.Before you realize it, 40-50 issues have gone by and absolutely nothing has happenned aside from a million cells depicting an action sequence. It's like the writer is engaged in a battle of attrition with the reader, seeing how long the reader will commit to reading utterly boring manga with no plot and stupid fights dragging on. I'd rather everyone in a fight sequence would die insatead of having 6to trudsge through another 8 episodes of some stupid fight between side characters that I could care less about.

The manga has an interesting premise and has some relatable characters but overall the execution is a chaotic money grab. The writer doesn't want to actually write a story, he just wants to pump out one issue after another of loosely connected images and no plot.

I'm at issue 100 and I'll be honest, I've learned to hate this godawful manga. it's horrible.

Brilliant Manga. One of the most original manga ive seen in a long time. Funny and well done. Shows how life would be like if you were already an OP protagonist. You would think this comic would be broing but it really isnt. Really wel done comic. Also can some one help me please. I dont know how to read comucs on this website. Ive read this one on other places. But i cant for the life of me find any ways to read any comics in this website

Very nice story that succeeds in making a satire out of shounen shows nowadays. Making the monsters present themselves for 1 - 10 min by overpowering the heroes and showing theyre power to humanity just to later get one punched by Sensei Saitama is very satisfying and pleasent to watch and read.

Murata's art is AMAZING and very detailed. I can't say anything else, I am just out of words.

Due to the MC being the depressed god he is, there is not much to cover about him and therefore a lot of characters in the backround have a good backstory and ideals cover in the manga.