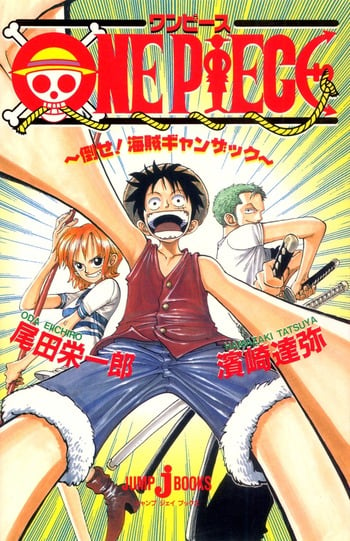 If you're looking for manga similar to One Piece: Taose! Kaizoku Ganzack (Light Novel), you might like these titles.

Rock (Okajima Rokuro) was just a normal Japanese businessman, but through a series of unlikely events, he found himself part of the "Lagoon Company," a group of transporters who do a little pirating on the side. Together with Dutch, Revy, and Benny, he sails the seas of Asia aboard the modified torpedo boat "Black Lagoon. "Their base, the lawless city of Roanapur, is just barely balanced on the brink of outright war, controlled and occupied by criminal organizations from across the globe. At the head of the pack are Balalaika of Russia and Chang of Hong Kong. Our story finds Roanapur just a little while before Rock, with Revy in tow, is due to head back to his old home of Japan.