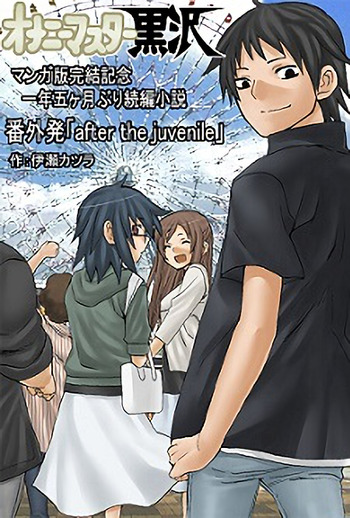 If you're looking for anime similar to Onani Master Kurosawa: After the Juvenile (Light Novel), you might like these titles.

The series depicts an active day of incidents and meetings that take place when Rilakkuma, Korilakkuma, Kiiroitori, and Kaoru go play in an amusement park that is about to close.

After watching some fireworks at an amusement park that is closing down, Licca has an adventure trying to assist Lunar in catching three night spirits. If the spirits are not caught, the morning will never come.

When young Ai makes an impromptu trip to the Japanese city of Kobe, she has no idea what to do after arriving. Luckily, help is at hand in the form of Kazami Kei, a giant chicken-man in a black tracksuit who decides to take time out of busy schedule to guide her around the city. As the pair travels around, Kazami hopes to open the Ai’s eyes to the fun of the Harborland amusement park, the joy of rotating cafés, and the beauty of Nunobiki Falls.

The two-hour special celebrates the anime's 20th anniversary, and will retell what happened on the day Shinichi's teenaged body was transformed into that of a child. The story begins when Shinichi sets up a date with Ran at the Tropical Land amusement park, and continues with Shinichi's encounter with Gin and the others at the park.

When a series of murders involving police officers occurs, chaos erupts within the police headquarters; and in an attempt to keep the citizens calm, the police decide to bury the case in the shadows. Soon, however, tragedy strikes yet again. This time the killer is after Officer Sato; he is shot in front of Ran, who promptly develops a case of amnesia and can’t remember anything – including the face of Sato’s attacker. With the perpetrator now on the loose, Conan must now protect Ran at all costs, and bring this case out of the shadows and into the light!