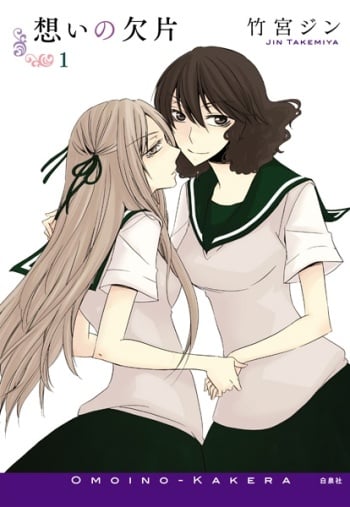 Mika, a high school student, has no doubts that she is a lesbian, few people around her know that though. She works at a cafe admiring the owner (she only has a thing for older women after all) and visits bars in the gay district. This story presents her life in pieces: from acquiring a surprising friend to helping a married woman discover herself and experiencing disheartening early love. All the while Mika is the confident young adult woman with an impressively mature mind.

I read this short series as part of the Manga Raffle League. The review will include general context spoilers, but nothing major about the plot will be revealed. This is a story about the day-to-day life of Mika, a lesbian who only dates older women. It's a slice of life series if ever I've seen one as there really is no overarching conflict. We're just following this character and seeing them interact with various other characters. In the afterword of the first volume, the author mentions how they incorporated characters with various sexual orientations and not just a focus on LGBT. Mika remains the central character and she sort of bridges the gap between sexual ideologies. In the first volume the series considers various feelings of sexuality and challenges various stereotypes. While Mika's story is presented as the primary one, the series later introduces a second story with all different characters. There isn't much transition between the two, so I found myself bouncing between two different settings and characters without much warning. By the second volume it wasn't as unexpected, but by the third volume, the secondary story is completely omitted and we don't see any sort of ending to it. Considering how it was presented, I wished that the series had stuck to one or the other, or just completely embraced being an anthology. With how short the series was, it was hard to really get invested in the story, especially when it was trying to tell two stories with zero relation to one another. I'm guessing it was done this way on purpose, hence the name (Fragments of Love), but the series also comes off as very scattered, and fragmented. There isn't much world-building, so a lot of the plot points seem to come out of nowhere. Which, again, I think having focused on a single story would've helped. We could've spent a little more time building up to things. So, overall, I just couldn't really get invested in the story. Things just happened without much consequence. Mika started out as an interesting character, but I felt that the deeper we got into the series, the less interesting the characters became. There wasn't a whole lot of depth to them, and while one of them was impressively annoying, even hating a character is good character writing, I just didn't find myself really caring about what happened to them by the end. There's about a handful of characters but, aside from Mika, they all are pretty one-dimensional, emboding a single trait. The "mysterious" character is represented as being mysterious by them saying, "It's a secret." The dumb character is refer to as, "They are stupid but honest and so how can we hate them." I found that I was being told what the characters were more than seeing it with my own eyes. Initially, I was taken back by the cover art, but there were some rather impressive panels and close-up shots of characters faces. I ended up liking the art more than anything else about the series. At the end of the day it wasn't the worst thing I ever read, but it also wasn't the best.