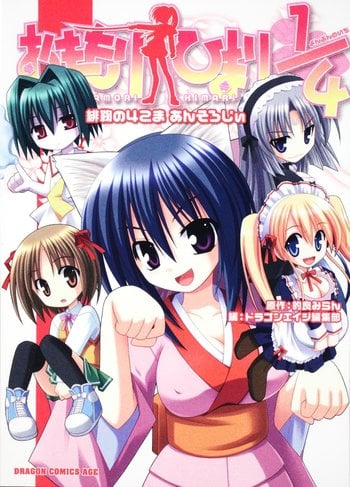 If you're looking for manga similar to Omamori Himari: Himari no Opanchu, you might like these titles.

Our protagonist, Outarou Kiyohime, is rather prone to getting pushed around. At the orders Nagi and Hibiki, a pair of gorgeous twins who head the student council, he goes off to ask the "Devilishly Hot Club," who are unlawfully occupying their club room, to kindly leave. But then, the club Captain, Fiolentina, falls for Outarou at first sight. She does nothing but hit on him, and he just can't get down to business! In the end, will Outarou be able to have them leave the room as per his orders? This is a soft and squishy 4-panel gag strip about a high school boy who is, for some reason, too popular with the ladies for his own good.

Ai Shiratori is your average junior high school student with a crush on a boy, Hikaru Kamishiro. With a love so rampant and true, and an imagination as wild as any girl's Ai sometimes has rather... ecchi dreams. But none of those dreams could ever prepare her for the reality that came to her in the form of the Archangel Raphael. You see, Hikaru Kamishiro is not your average boy. Hell has plans for him and Heaven isn't about to let those plans come to fruit. While Hell sends their Hell's Apostles to get Hikaru to commit the seven deadly sins and drag him into hell, Heaven sends their secret weapon: Ai. What is Ai's mission? Nothing short of consummating her love with her beloved Hikaru... but wait by consummating you mean... sex?! Can Ai handle the Archangel's request and save her true love?

The naturally clumsy Sister Asia and taciturn cutie Koneko form an unlikely devilish duo in this spin-off of the mega-hit High School DxD! The two head out to answer summons from humans with requests, but...th-th-they want Koneko and Sister Asia to do what?! These two little devil beauties get to work! But can they really fulfill every desire?!

Kaimetsuou to 12-nin no Hoshi no Miko

Yomikado Meijirou thought he was just an ordinary high school boy. However, after saving a devil, he discovers that he was born with the Seal of Solomon on his tongue, a special power that allows him to control all forms of sorcery and devils. He also discovers that he will die in three years as every use of his power uses up his lifespan. He is told that the only way to save himself is to establish a contract with the 12 Starlight Maidens who were born with a special sign somewhere on their body, and to do so, he must lick their signs with his tongue, which is where his sign is located.

Regular high-school boy Kaji Rikuo’s life is suddenly interrupted by a cute girl with cat ears named Vanilla. According to Vanilla, she was created from different mixtures of animals sort of like a chimera by her master, Ibu Kiriko, whom apparently has it out for Rikuo. Confused as to why somebody would want revenge on him, Rikuo become friends with the clueless and cute Vanilla. However, Vanilla can turn into a vicious animal able to hurt Rikuo with a simple command from Kiriko…

Kitsune no Akuma to Kuroi Madousho

Narrates the story of Kyuuki, a strong, proud fox demon who recently woke up and needs a host and Kamishiro Shin, a normal would be high school student if it wouldn't be for "his ability" and for the fact that he got a hold of the black Grimoire that controls Kyuuki's existence. Shin is bound to the book as long as he is alive, thus not only he can't sever his connection to Kyuuki; but those who want the book's power are bound to come after his hide regardless of time and place.