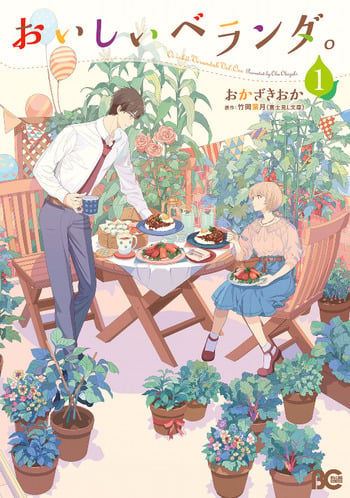 Suddenly summoned to another world, former office lady Fukuyose Mahiru becomes a lunchlady in order to cover her living expenses, as well as gather information. Then one day, she gets her hopes up when she hears a rumor that the genius Magician Randy may hold a hint to help return her to her original world. "To find the practitioner that summoned you here, we must uncover the motives behind it." Things become messy after it's determined Mahiru holds a great amount of magical power, and must therefore cohabitate with Randy?! And on top of that, he finds eating to be too troublesome, making him the ultimate picky eater!

Suzuna Inaba who graduated from the university and is going to live together with Seto. Their new life to make up from the one in two people start a new life of two tipsy that became a little adult ♪ a lot of delicious things!

One day, I realized that I, a former Japanese, had reincarnated into a different world as Cristea Ellisfeed, a Duke’s daughter. Reincarnation…? Duke’s daughter…? A world with magic…? Is this a light novel!?!? I received the reality while being confused. However… I’m dissatisfied with this! This full course is somewhat dissatisfying! Sweetd - only sweets! I’m sick of it already!! The taste of commoners, please!!

Romance and happiness blossoms at the Happy Cafe! Uru takes her mother's remarriage as an opportunity to work part time at the Happy Cafe. There, she befriends Ichirou and Shindou, two of the most unsociable guys she's ever met! To make matters worse, it turns out that Uru is not exactly meant for the waitressing world, as she's a huge clutz. But as this hilarious shojo tale unfolds, true happiness - and even true love - lurk just around the corner.