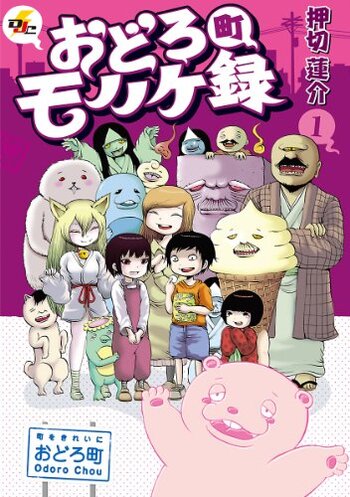 Mitama Kamishiro is an athletic junior high school girl with a strong sense of justice who has dreamed of becoming a crime avenger since she was little. A mysterious shopping district, “Yaoyorozu Shopping District,” suddenly appears in front of the silly yet righteous Mitama, who “wants to save humanity from its inevitable downfall.” When Mitama goes to the shopping district that seems to be calling out to her, she is faced with...

Attack of the Zashiki Children

In a tale as epic as Noragami, sometimes details get overlooked, like how do shinki normally find employment? Is Yato ever useful? What happens when a god is targeted by a serial killer?  Find the answers to these questions and more in this collection.

Girls cry! Laugh! And get harassed! Young female college student, Hino Motogane, starts a part-time job at a small late night Izakaya. However the shop’s clientele – were youkai. These youkai do all kinds of things to their favorite Hino, sometimes they strip her, sometimes they cover her in spit, no matter what they work her to death! After all, she wants her paycheck…

Yuka Asagiri, a new civil servant who works in the secret department of the Ministry of Land, Infrastructure, Transport and Tourism, "The Shadow Promotion Division". From the ghost of a child I met in a coin locker to Inari who was left behind on the road to an old man who spends time with his late wife in a marginal village

Tsukumogami are objects that have become alive after one hundred years. One day, while cleaning out the old cellar of his childhood friend, Chihatsu, Arata inadvertently releases a hoard of malevolent tsukumogami. Deciding to take the opportunity to exact revenge on her ancestors, the tsukumogami kidnap Chihatsu, leaving Arata desperate to save her. Now along with the help of the spirit of Iokura Kabuto who has sworn to protect the family line, Arata must find and rescue Chihatsu from the clutches of the evil spirits.