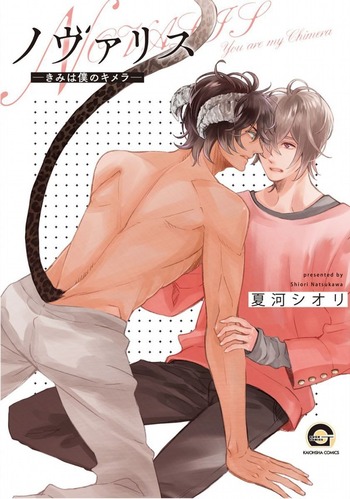 If you're looking for manga similar to Novalis: Kimi wa Boku no Chimera, you might like these titles.

It's a world where humanity is divided into canines (dominants) and felines (receivers). Being one of the most common and numerous domesticated cat among the felines, Aoi Natsuyama's dream is to get married to his ideal prince! Aoi, who earnestly fell in love with the refreshing handsome wolf prince Yukio after discovering him in a DOG x CAT AV, jumps into the world of AV to somehow get closer to him. However, it turns out Yukio's personality is neither refreshing nor kind?!

One morning, Otokita Hideto wakes up with cat ears. He consults a friend, and ends up going to a research facility, where he’s discovered by super-otaku research worker, Nakabayashi Kouhei. Excited by the curiosity, Kouhei takes Hideto home with him?! This is the cat ear hustle mating season!

My Boss is a Yapping, Mean-Spirited Fox Spirit (Light Novel)

Ibuki, a child of a fox spirit and a human, is despised by his fox spirit relatives due to his parentage. However, Ibuki’s own fox spirit abilities awaken at the age of 13 upon the death of his father, giving him close to godlike powers. To escape those who want to use his powers for devious purposes, Ibuki seals his powers away and hides in plain sight as the personal assistant of Tadatsugu, the next head of the Kuki family, the strongest of all fox spirit families. Now that Ibuki’s been put in the sights of those scheming to use him for their own devious purposes, he seals his Despite Tadatsugu’s extremely intimate body touches, Ibuki works hard to be good at his job. But what happens when a god of death from Ibuki’s family tracks him down? How much longer can Ibuki run from those who want his power?