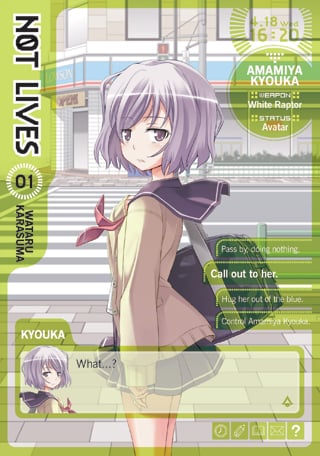 Both have a player and avatar, waving their life in game. Earning points through killing other players.

Both ends with the game world ending and restarting

Both have real sad endings; but Not Lives was a lot harsh (I almost cried)

They both have very similar premises, where the “players” have to fight through others using special powers and consequences fall upon the losers. As I was reading, this anime was constantly in my mind.

Characters are put in very similar scenarios with similar risks at stake. I’d bet one was inspired off the other.

(Trying to explain this the best I can with as few words as possible. Sorry, but I went on longer than I meant to >.<)

In C, rather than having a death game, there’s a special bank gives large quantities of money, but holds your future as collateral, and people are pitted against each other spending money on using powers. A persons money acts as their health in a sense, and when an attack hits, their money is transferred to you. Battles end when one person goes bankrupt, or the timer runs out.

If you lose, your life is written over, removing your potential future depending on by how much you lost; events in your life might be erased, and suddenly children you dad, marriage, achievements, your house, anything could disappear.

In Not Lives, players are pitted against each other, fighting using avatars until one loses. The penalty for losing is the avatar gets deleted and the player becomes an avatar for the next player. The advantage is that abilities gained from the game can be used in real life.

As thanks for playing in The World, its makers are pleased to announce a new hot springs location for the users! But like many special events, the area is hidden, and only those who can solve the mystery will find it. Tsukasa, Kite, Mimiru, and the rest of the .hack//SIGN and game world bunch are up for this challenge -- with one problem! The only clue lies in the word "Gift"...

With the help of the power of the Pharaoh, Yugi Moto has earned the reputation of being the “King of Games.” But Seto Kaiba finally has a plan to bring down his rival, and with his new and powerful cards, he might finally have a chance of succeeding. Meanwhile, a new artifact known as the Pyramid of Light has captured the attention of Yugi and the gang, as it bears a striking resemblance to the Millennium Puzzle. Soon, Seto and Yugi will face each other in an epic battle – but something mysterious is at work. Will Yugi, the Pharaoh’s wistful strategies and the Egyptian God Cards be enough to put a stop to the ultimate foe?