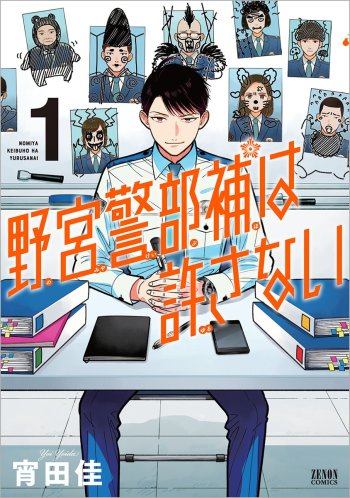 A relaxing and fun piece about a policeman who finds himself dancing to the sound of anger.

Stationed in the country side, Sawajiri Ai, a new recruit to the police force, didn’t think she would ever see any kind of action. So it comes as a shock to her when she is transferred to headquarters into a division she has never even heard about: the 82nd division. Also known as the Beauty Division, the female officers all are gorgeous woman with extraordinary talent and skills. They use their God given body to infiltrate and crush criminal organizations and wanted men. Ai has her work cut out for her since all the members are motivated as well as extremely “persuasive.”

An epic gun action manga chronicling a young policeman with psychic powers who does battle with a slew of freaky foes! Matoba Isamu is a failure of a policeman who hates guns. But then, when a sudden bank robbery happens, he walks right into the scene completely unarmed, and somehow defeats the two crooks! Meanwhile, Azusa Yuzuru, an officer from the central police department catches Matoba's quick, superhuman movements on the security camera, and decides to investigate him!

"Rashomon" is the last gate for humans to pass in life. Detectives of Toto Police Station have an urge to fight against something beyond crimes.