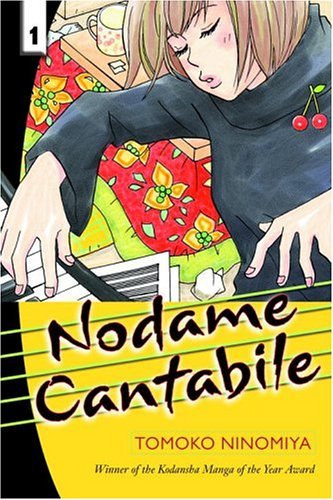 Story: Music and romance. It sounds like it become really cheesy and predictable. However, it wasn't. It did the music aspect justice. It wasn't just a bunch of bs. I likes the plot and the overall pacing. I never felt like it was too fast or too slow. It had a slice of life feel to it but it didn't drag. It progressed nicely and the changes were subtle but evident. I like the development of the romance and there was ample comedy. There's definite substance and I would recommend this to anyone looking for something with music, romance, comedy or even slice of life. In addition, I enjoyed the ending. I thought it summed up the series nicely and if you're looking for a more complete ending, then there is a small sequel.

Art: I am disappointed in the art a bit but I have to remember that when this series came out. The art improved throughout the series but it was still never that great. It was just mediocre. However, it did relay humour well.

Characters: Surprisingly likable. I didn't like some at first but they grew on me which doesn't happen. The mangaka has a way of pulling out their good points slowly and subtely that makes you not hate them in the first place but then grows to actual like. Not love but I do like them. They are a fun, interesting bunch that I will remember. I like the dynamics between the characters as well which is suprising because I never thought I was going to like Nodame.

Overall: A really enjoyable, worth while, educational, fun, laughable but moving read. It makes you think but it's still light. An overall great read. May not be one of my favorites but I would definitely own and read the series.

I LOVED IT. THE STORY, THE ART, THE ANGST AND FLUFF OMFG I CRIED SO MUCH I LOVE IT. I finished all 136 chapters in one day though ahaha...