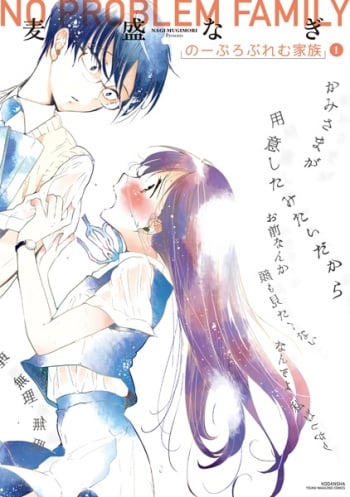 In a shocking twist, Kyousuke's sister Kirino has decided to study abroad...and Ruri Gokou, a.k.a. Kuroneko, is transferring to Kyousuke's school! Is his homeroom prepared to have the dark Queen of Nightmare among them...and is the manga world prepared when Kuroneko makes her first pitch to a professional company? One thing's for sure--Kyousuke will be by her side, supporting her. But how close is "by her side" going to be...?

Haruka is an unlucky highschooler but one day she grab the happiness. She is going to get married with her fated husband, Masayoshi. He had been married once before but he is serious and kind, and supposed to make happy family life but then...

Shinjou Shouryuu is a healthy 17-year-old high-school boy. Many of his kouhai wonder why such a great guy doesn't have a girlfriend. Ask him and he'll tell you that between school, work, and saving his kouhais from bullies doesn't leave him much time to go on dates. So he instead goes online to "F.I.L. GATES". There in the chat room his alter-ego, Kakeru, is infatuated with the girl called Hal. Hal sends a message reminding him that Sunday will be the six month anniversary of when they first met (online) and that she wants to meet him in person! And let's just say it's not your typical first date.

This collected volume was named after the longest of the four stories that it contains: a drama about an adolescent girl who falls in love with Roger Martin du Gard’s saga, Les Thibault. The remaining stories capture various fragments of everyday life with tenderness and humor. Through the kaleidoscope of its feminine views, The Yellow Book touches the readers heart by attending to what, in sum, makes up life—the little things of our every day.

Inugami Tsubaki is the perfect girl and has her future perfectly planned: she's beautiful, smart, skilled in sports and loved by everyone. As the future head of the most powerful financial clan of Japan, it seems nothing can stop her. However, in her first day of High School, she mets Sarutobi Sanosuke, a wicked guy who outsmarts her and quickly becomes her enemy - what's going to happen between them?

Ever feel like your existence does not matter? Ever feel like no one would care if you died? Izumi Hoshi is a pessimistic high schooler ready to kill herself by jumping off a bridge. Turns out that drowning is pretty painful, so she chickens out. Takuto Kurihara saw Izumi jump from the bridge, so he tries to save her. It turns out that Takuto has the personality and skills to bring out Izumi's hidden talent that she never knew she had.

The remarried mother. After their divorce, the father who lives with his "boyfriend". Living surrounded by such family members, high schooler Mayuko is now at the height of her adolescence. Beginning from Mayuko's "runaway", intersecting various lives, these are the runaway stories which will dye in to your heart.