No fair! Chief Madarame is a pervert!: I'll do you inside the way I want. - Recommendations 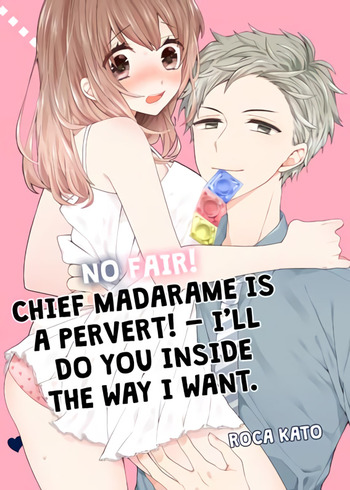 If you're looking for manga similar to No fair! Chief Madarame is a pervert!: I'll do you inside the way I want., you might like these titles.

Did you say that? I wish I had a connection with you. Passionate career woman Ayame is as good as any man in her field. Although she has suffered through a lot of hardships, her juniors rely on her and every day feels rewarding. One day, she hears a rumors that the son of the company president will take over as acting president in place of his sick father. At night, relaxing with a drink at her favourite bar, she meets Tsubaki, a strangely friendly and frivolous yet undoubtedly alluring man. Drunk on alcohol and the atmosphere, the two spent the night together...

My Ravenous Boss! Hug You as Many Times as Likes I Gave You!

"I know you want me to eat you up." When Honoka sees men eating, she can't help fantasizing about them. She secretly posts her thoughts on social media. One day, she suddenly gets transferred to another division. Her new boss, Akito Nakamura turns out to be a handsome devil whose manner of eating is very much to Honoka's liking! "I can make your wish come true." Did he see right through her!? His thick fingers and tongue keep reaching for her sensitive spots until her body is just about ready to be eaten...!

Akane Kinuta, an office lady who lies about getting married to keep her job station and otaku hobbies safe. She gets caught by her hot, perfect gentleman boss Kuroki Tsuneyasu... who orders her to do a fake wedding!! They practice having sex to keep their marriage lies from being found out, but Akane's naive body is at the mercy of sexual pleasure...

Love Games with the Boss: Can This Capable Man Handle Romance, Too...?

"Would you go out with me?" The boss I idolize suddenly asked me out?! I'm so happy... But also not... I mean, he only really knows my at-the-office persona, right? -- The words that haunt her came from the boy she liked in high school. "There's something different about you." Now unable to show her true self in front of anyone she has feelings for, Aya is suddenly asked out by the boss she both loves and respects - her manager, Soichiro Mishima. Fearing that he too will be disappointed if he sees her true self, she is unsure how to handle things. But, while Aya is still spinning her wheels, Mr. Mishima proposes letting him make a few "inappropriate advances" under the pretext of her getting to know him better.

He's going at her so hard. She knows it's wrong, but it feels so good, she can't stop! Chikage Ayashiro (26) has been thrown into a project with her boss, Toru Aogiri, who's a playboy and hard to grasp. After a kick-off party, she ends up alone with him for some reason! But, once the two talk, he seems more serious and... Drunk, they wind up at a hotel where Toru turns out to be kind... As her body melts and he has his way with her, she can't stop screaming. It's her first time, and with someone she was hesitant around. So, why does it feel so good...!?

Yui Sasaki is a closet fangirl who lives for the 2D world and its hotties. She daydreams about love and wants nothing more than to experience a beautiful romance, but she's never had a boyfriend before. One day, her strict boss Kazuki Takase finds out that she's been listening to a kinky CD and says something absolutely unforgivable! He tells Yui that love is meaningless which greatly angers her. Starting from that moment, she vows to teach him just how wonderful love can be... but could it be that she's about to get more than she'd bargained for!?

To ease her grief after the death of her beloved dog, the reclusive Miyawaki decides to attend a company party. But, after a round of heavy drinking, she wakes up in a hotel room... next to her boss! The next day, he confesses that nothing happened between the two of them, but that it did have the welcome side effect of relieving his insomnia. When he requests to sleep with her again, Miyawaki only agrees on the condition that he becomes her pet. However, she soon realizes that training her new pet isn't as easy as she thought it would be.

Pouring It All in Without Wasting a Single Drop: Satisfying Sex with My Passionate Boss

"I... Want to strip you bare..." The tip of his tongue stirs my tight pussy...I can't think about anything else after he'd made me feel pleasure for the first time! Shungiku has been leading a serious and mundane life as a waitress at a tea house. But at her sister's wedding, thinking it's going to be ""just this once"", she becomes overzealous and makes a huge mistake!? Before she knows it, she finds herself alone in a hotel room with a mysterious man...  ""No need to overdo it. Aren't you perfect the way you are now?"" Being encouraged by his unexpected kind words, she boldly exposes her real self... This relationship was supposed to be only for one night, but the next day, he shows up at work! No way, I... Had sex with the vice president...!?

I'll embrace all of you: Zero days dating, then suddenly marriage?!

"You're so wet, you're overflowing... I'll take of care of this for you." "Director... if you keep going... I'll cooome...!"? 33-year-old bank employee, Kiyoko, has marriage right before her very eyes, but then one day her engagement is cancelled out of the blue. The one who comforts the disappointed Kiyoko is none other than her nemesis, Director Samejima, her superior. Loneliness on top of a few drinks, and the next thing she knows she's in bed, violently coming... The hard, hot shaft of the unapproachable director is now thrusting deep into Kiyoko, giving her a taste of unimaginable pleasure. However... The day after what Kiyoko assumes to be a no-strings-attached one-night stand, the director announces, "We got married"???!

Why Would You Get Hard Over Me, Your Boss?

I can't believe the face I made when my subordinate told me he loved me. No one's ever gotten erect over me, so I don't know what to do...!