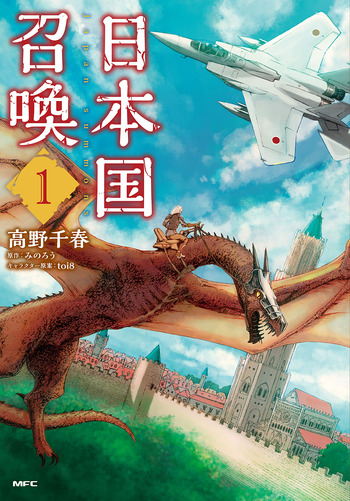 Both these manga feature the JSDF taking on foes in another world!

In Nihonkoku - Japan is transported, and they have to play more aggressively because they have to import most of their resources from external countries, so they need to play god to set balance.

In Gate a gate to the fantasy world appears in Japan and in Japan Summons, the entire country of Japan is summoned into another world.

A gate appears in Tokyo's Ginza district sometime in the 21st century. From the gate pours out monsters, knights from middle-age Europe, and other fantasy-like beings, and they kill many of the citizens of Tokyo. This event is known as the Ginza Incident. The government sends a small group of soldiers from the Japanese Self-Defense Forces (a replacement for Japan's military) to the alternate world beyond the gate. Led by otaku soldier Youji, they find that the villages in the world are being attacked by a dragon. An elf girl who is a survivor from the dragon's rampage joins the group in their travels across the dangerous new world.

Regis Ulrich is an incapable soldier; bad at both sword and archery, who passes the time by only reading books. While transferring to a remote region post, he meets a girl who turns out be the red hair and crimson eyed princess Altina, the wielder of the Supreme Ruler's Sword. Despite being only fourteen years old, she was appointed to become the commander of the army in the remote region simply because she was the illegitimate child of the Emperor. However, she continues to hold onto her dreams of becoming Empress despite the circumstances that surrounds her. To achieve this goal, she asks Regis to become her tactician and stand alongside her against the obstacles they are sure to face.

Inept with a sword, unable to ride a horse, and apathetic toward the empire he serves, Regis Aurick is a hopeless soldier who spends his days buried in books. Banished to the borderlands, he encounters a stirring young woman with red hair and ruby eyes. She is Fourth Princess Marie Quatre Argentina de Belgaria, known simply to Regis as Altina. “…Do you want to become my tactician or not?” Having sought him for his rumored strategic prowess, she aspires to reform an empire led by self-seeking nobles and driven to pointless wars, the legendary blade of an emperor, the Grand Tonnerre Quatre, at her hip. Continuously underestimated by her regiment, including her would-be tactician, the princess resolves to prove her worth beyond a shadow of a doubt—no matter the risk. Here is a tale of war, love, and politics, woven by the bookworm and the sword princess.

Herian was the ultimate player of the nation-building VR game “Tactics Chronicle” when he got transported into the country he built himself in the game. There, he met the great army of magical beast which possessed their own ego, as well as his peerless former NPC generals. Hiding his identity, what he found together with his vassals were the Elves battling against a great evil. Seeing the tears of the innocent masses, he came to a realization of his duties as king and made a declaration in anger. To vanquish evil with the hundred thousand magical troops under his command! “Stand up, my brave people! Now is the time to bare your anger!” ““OOOOOOOOOOHH!!!” The moment the thunderous roars resounded—the peerless Alchimaira breaks off ahead!! The king of a thousand beasts now orders the attack of the strongest army!!

This shitty world that's nothing but a trashy game, he and I will definitely escape it together. So, all these annoying women trying to take advantage of him are just a nuisance. What's worse, it seems like he's beginning to have some feelings for them. That's why, for his sake, I'll eat them up first. But, just what is this power...?

Our protagonist is a college student who enjoys playing as the evil-aligned faction Arachnea in her favorite real-time strategy game. One day, she finds herself in a world similar to the one in the game; additionally, her body is now that of a fourteen-year-old girl. While things are a bit different from how they were in the game, one element has remained the same: she is the leader of the Arachnea. The insects under her control, collectively known as the Swarm, praise her and implore her to lead them to victory. In order to survive, she raises her Swarm and forms friendly relations with the elves of the neighboring forest. But after a slaver traveling through the forest murders one of her Swarm and the nearby kingdom’s knights burn down the elven village and massacre its people, she prepares to launch her counterattacks in the name of revenge. However, revenge is merely a pretense for attacking the countries of this world. Her command is masterful and severe, as one who has played the game in real life...