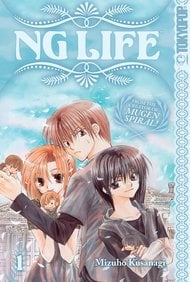 In the year 79 AD, the city of Pompeii was buried under volcanic ash, and two lovers, Sirix and Serena, were separated by death. Now, Sirix has been reincarnated into a high school student named Keiki. His current father was his biggest rival, his mother was his sister, and his classmate was his best friend; but what Keiki really wants is to reunite with his lover, Serena, once more. Thus he believes it’s fate when she moves in next door, but there’s a catch: she’s actually… a he?! To make matters worse, it appears his best-friend-turned-classmate is in love with Keiki, while his lover-turned-neighbor is in love with his classmate. With dreams of Pompeii in his sleep and love triangles abounding, will Keiki ever reunite with his beloved Serena?

I'm not really sure what I was expecting from NG Life, but I fell in love with it far more that I would have imagined. It probably helps that I have a bit of a soft spot for ancient history, but it really is a great series. The main character, Keidai, has memories from his past life as Sirix, who lived in Pompeii. Throughout his life, he's encountered people he knew from his past life - although he's yet to find anyone who still has their memories. Then one day, the person who he wanted to meet most from his past life, his lover Serena, appears as his next door neighbour. His male next door neighbour. Hmm. The story shows his ongoing struggle to seperate the past from the present, and how he reacts when he encounters more people from his past. Keidai is a sweet character, but extremely hung up on the past. His personality is pretty similar to any stereotypical mc's, but due to his backstory and how emotional he gets over the past sometimes, I felt a lot more empathy than I usually do towards that sort of character. Serizawa is a super cheerful and yet pretty complex character. Yuuma is just awesome. Actually, all of the characters have quite a lot of emotional depth and interesting personalities. I felt myself sympathising with pretty much all of them, which is very rare for me, and by the end I was completely attached. For lovers of great characters, being very emotionally invested in what you're reading and ancient history, this is absolutely perfect for you.

MY FAVORITE MANGA!!!! note: his names not Keiki, its Keidai!!!!!!!!!! This manga is a romantic comedy with lotsa feels and all that good stuff. Keidai is the only one he knows with memories of his past life in pompei. In his new life in japan as a student, he met the reincarnation of his old best friend who is now a girl?? also, a new neigbor, who happened to be his tragic past lover, now a guy?? over time we meet more character from the past pompei, some with and some without those same memories, but some of them still have a bone to pick with eachother and have held their grudges for the past severel centuries. Now new relationships will be formed, old ones will be reconnected, or broken.   time for my unprofessional manga almost-fangirl irrelivent details and such ♥this is my favorite manga and it just really needs an anime because seriously?? i love it! It is SOOO funny, i love the characters, and their past life selves. the ending gets me evertime, its soo good. ♥like one minuet you'll be laughing, the next you'll be fangirling a teeny bit, then you'll be sad, then your laughing again. ♥Keidais reactions to things are so out of the ordinary and hilarious, he's my fave character, he's such a wierdo that everyone is really concerned for him if he doesnt flip out atleast every 24 hours. However at some points you really can feel for him, his loyalty and love for his friends is very strong, and in a way, its that loyalty that brought this story together, in their past lives and present ones. His kindness at points was so unexpected and touching, especially this one scene at the beginning of his friendship with loleus (serizawa) that was practically suicide to protect him, loleus's reaction really got me. SOOO GOOD ♥over time the art for the friend serizawa improves so if your like 'shes not that cute.' trust me, she gets cute. ♥theres i think 2 complicated love triangles, ones hilarious to watch the other is sad. its funny to see keidai see his past wife (now a boy named Yuuma) flip out over him he's like "Gah! he's so cute! No wait he's a boy! but he was my wife! Wait, do i like [blocked for spoilers]? no way! thatd be so weird! Yuuma is my love! yes! wait, No! hes a guy!" like, idk, you have to read it. please read it ;-; ♥the other love triangle involves 2 sisters a guy who betrayed them in their past lives, one sister who lost her memories, and one who longs for the memories he never had.

Ng life forever... The best manga i have ever read..