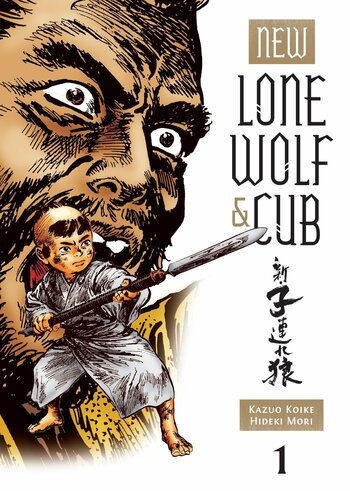 Rendered immortal by an infusion of mystical worms that can repair any wound, the masterless samurai Manji wanders the hillsides of feudal Japan, his quest to slay one thousand evil people to atone for his past sins. By his side is the young woman Rin, an orphan who seeks vengeance for the murders of her parents. Driven in a quest for absolution, the two have faced many deadly challenges, both natural and supernatural. But can they survive their greatest battle, against the all-powerful Inugami?

During the political upheavals and social strife at the end of the Tokugawa Shogunate in Japan (1855), two parent-less brothers Yukimura Shoutarou and Yukimura Gentarou struggle to survive in these turbulent times. With their only possession being their deceased father's sword and clinging onto the wisdom of their mother's final words, the brothers seek to embark on the Path of the Warrior: Sidooh.

Set in the Edo period of Japan, the high-ranking daimyo of the Mito-domain cannot keep his bodyguards alive as they travel Japan. To replenish his bodyguards, they institute a recruitment exam aimed towards the poorest of samurais of Japan, "rounin." As a rounin, Inouse Shinnosuke attempts to prove himself to the ranking officials and escape poverty.

Wandering traveller Kurotsuki Yukiji goes from town to town enjoying the women, food, and culture each has to offer. He is the master of the Kurotsuki style martial art where instead of using brute force, it uses the aiki form where you use the opponent's strength and manipulate their force against them. It focuses on settling the conflict without hurting both sides and harnessing the "bladeless soul." Yukiji is travelling to perfect this style and trouble usually finds him despite his peace-loving nature.