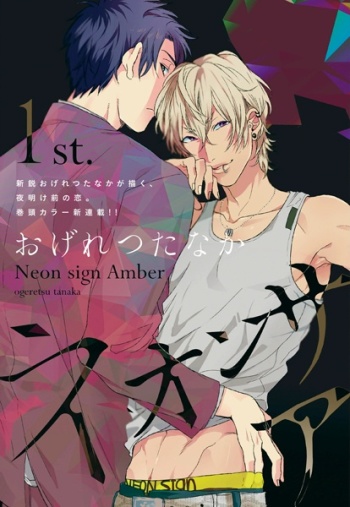 There are elongated faces. The eyes for the two characters are flipped versions of each other--one has a triangle pointed up while the other has a triangle pointed down. The screentones and shading are done well, effectively giving off the proper club vibe of dancing lights in a dimmed atmosphere. The dicks are present and the balls are unhairy. There's sweating and blushing and nipples. Ya know, standard yaoi stuff. What other art details do you need to know? I liked some of the panel layout choices. Most notably, the one masturbation scene where the flashes of Ogata's fantasies were overlaid in small panels over a full-page spread of a giant, dripping dick. Great stuff, great stuff.

"Should I stop doing this to other people?" Ogata asks in chapter two after having forced a kiss onto Saya without permission. And since it wasn't properly answered within the pages of the series, let me answer that. Yes, Ogata, you should immediately stop doing that type of thing, you casual molester. Also, the standard for consent shouldn't be asking whether the person you are pushing yourself onto hates it (as you suggest in chapter three). Not-hating it isn't the same thing as wanting it. Stop phrasing things in ways to try to subtly manipulate the person you're with into relenting. Also, how about you ask the question before you take action, you creep.

Anyway, rape-y aspects aside, this story was pretty nice overall. It primarily alternates between scenes at the club where Ogata works and scenes at Saya's family's restaurant, where Saya cooks for Ogata. I especially liked Ogata's realization in chapter three that love doesn't necessarily translate into sexual compatibility, though I think this story would've been so much better if it had leaned into that realization and ended in a less "happy ending" type of way. Maybe if the two of them had become emotionally intimate, and maybe had some level of physical intimacy (like kissing or light petting), but also had other partners who they were more sexually compatible with. Ya know, ethical non-monogamy. Sure, what I'm suggesting isn't the standard, simplistic storybook ending that you tend to see in romantic stories, but I think it would've fit the flow of this story so much better and would've actually reflected some of the complications that can occur in the real world a lot better. As is, it's just yet another fluff piece that sands away all the rough edges of human relationships in order to achieve a fairy tale ending.

Great story and art but there are breaches of consent throughout the story. I would classify it as sexual assault or dubcon. Probably one of the most consensual ones Tanaka has written though :/ the standards are not high.

I would love it a lot more if it were fully 100% consensual.

This was one of my first BLs (well, more specifically Yaoi as it's explicit), and it really hooked me in with the cover art. It's still one of my favourite BL's.

Needless to say, the gorgeous art is an instant 10/10.

Story: kind of the classic opposites attract story. I quite like the concept.

Ogata (stoic man) and Saya (smiley man)'s relationship develop well, and there are hot moments as well as cute moments. Personally, the development feels a bit too quick to me, but that's probably just in real time, as in the story they develop it over a longer amount of time. Well, compared to most Yaois, this is one of the better paced ones. There is drama in the middle of the story where Ogata couldn't bring himself to have sex with Saya, and this damages their relationship, but they resolve it at the end. It's a happy ending story, and I like the ending.

The main characters have lovable personalities, and realistic fears to overcome. There are nearly no extra characters, and the ones that do appear are a push to the main characters' decisions. The story focuses on just the two of them, which I like.

This one made me cry a lot. I wanted to hug Saya so bad. The story is really good and, even though the ending feels kinda rushed, it has a very nice pacing to it. You really end up feeling everything the characters are going through. The only reason I didn't give it a 10 is that I think it would have benefited from being 1 or 2 chapters longer.