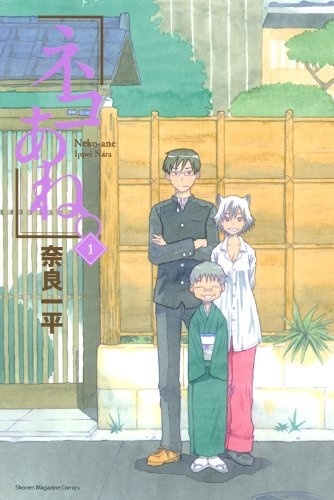 College student Aki is shocked when a teenage girl suddenly barges into his Tokyo apartment, acting as if he should know her. When the truth becomes clear, the situation is even stranger. The 'teenage girl' is actually his precious pet cat Mill from his home in Kyuushuu, who is apparently an 86 year old 'monster cat' who can change between cat and human forms. Will Aki be able to fit his supernatural pet cat into his ordinary college life?

Both are slice of life manga with similar vibes and pacing. In both, a cat that either belonged to the mc or one of his family members turns into a human, and the rest of the manga is a cute telling of their life thereafter. Both cats that turn into humans have unique personalities, while the mc is your typical teenage/young adult guy.

The Twelve City, a land governed by the leaders of the families who bear in their names the Chinese zodiac. In a city where youkai and humans coexist, the cat youkai who holds a grudge against the Rat Family appears in front of Nekuni Kyouichi, the head of the Rat Family. It's a malice-covered Hateful cat who is aiming for his life. But that youkai is Nekogasaki Natsuho, who's also extremely anxious around other people... Just like the saying "Curiosity killed the cat" goes, will these feelings also kill the cat?

Yukiharu Izumi just wants one thing—to be a normal high school student. But homeless, penniless, and with nobody else to rely on, he finds himself begging on his knees in front of…shape-shifting cats? They’re willing to take him in—but only if he waits on their every whim. And so start his chaotic days as the catlords’ manservant!