Alt title: I'm a NEET but when I went to Hello Work I got taken to another world 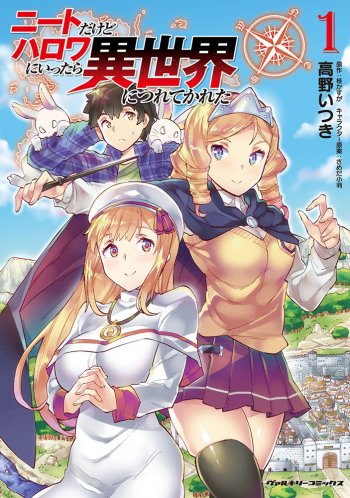 Why did the god have Masaru sign a contract? It's not as though contracts have intrinsic power that applies across dimensions; without a society to enforce them, contracts are pointless. And if the god knew that Masaru didn't know what fe was getting into when signing away feir rights, then it would've been just as ethical to just kidnap fem. But the god's actions don't have to make sense, they just have to lead into the setting.

I don't think a single character acts in a way I'd expect from an actual person. Masaru is weirdly nonchalant about feir situation. The girls around fem fall for fem way too easily. And probably worst of all, Drevin and the others in the guild are oddly invested in Masaru's life right from the get-go. Why are random guild-members checking in on fem and applauding feir successes? People just don't care that deeply about other people.

With how much Masaru seems to care about helping the downtrodden and vulnerable, fe doesn't bat an eye at the systematic oppression of women and, in fact, seems to actively encourage and desire it. There's literally a conversation about the validity of slavery and the conclusion Masaru reaches is that slavery is fine as long as both parties are happy in the end. One of the reasons why slavery is abhorrent is because, even if a slave willingly and happily consents to being a slave, if fe ever stops being happy with feir situation fe can't get out of it. Slavery isn't just a culture value thing. It's a respect thing. If someone is willing to prevent somebody else from having control over feir own life decisions, then fe is disrespecting that person. And acting as though you can love somebody while simultaneously disrespecting fem is absurd (Masaru tells Kreuk fe could ethically marry a slave, though fe femself acts differently). This also raises the question of how they portray one man having multiple wives as fine, but imply that one woman can't have multiple husbands. This shows a sexist view of marriage, with the women being treated like rabbits in a hunt to be conquered and then cared for by the men.

Throughout this manga, Masaru's initial run-in and pitiful defeat by wild rabbits is referred back to. Fe even leans into feir nickname as the Rabbit Hunter and makes hunting rabbits feir specialty. Compared to natives of this world, fe quickly learns magic and other skills because of the videogame-like capabiltiies the god has given fem. Fe has done a decent amount with healing magic, though has also learned quite a few offensive skills. Even though Masaru has cheat abilities, fe isn't shown as being capable of solving all problems or winning all battles, so that's nice.

I didn't really like the artwork all that much. The faces and body movements seem stiff, with the eyes and hair possibly adding to this. The buildings and backgrounds are alright.

Fantastic manga with realistic characters, using the best of the isekai cliche's while ignoring the bad ones that I won't go into here. Everything in it is explained with good reason, the arcs the characters go through make sense, and overall it's just incredibly enjoyable.

Not bad but not that great either. Good to pass the time and worth a read but not anything too spectacular. Still props to the author for not going into a complete cleche.