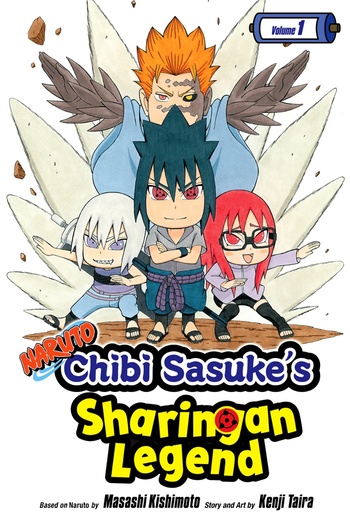 First off: This is a gag manga, if you are looking for something serious, or with cool fight scenes, etc., you will not find it here. That being said, I really like this manga, and would definitely recommend it for any and all Naruto fans who enjoy a good laugh, chibi, and/or stupid gag jokes. It is a pretty short manga, so you could even finish it in a day, but those few chapters are packed chock-full of laughs, humor, and outright stupidity. Overall, worth checking out. (assuming you're not particularly opposed to this type of manga, and know the characters pretty well.)

Each chapter consists of a series of short gags, about two or so pages long, centered around a shared theme. The themes are sometimes seasonal or built around other slice-of-life type topics which clash with the supposedly serious nature of Sasuke's journey (such as beaches and festivals and whatnot). Chapter 12 has characters gender-swapped and chapter 19 has them kindergarten-aged. There are loose recreations of events from Naruto, with largescale battles over stupid and mundane things. This can be slightly funny. There are also several crude jokes, dealing with things like dicks and shit. I think my favorite segments were the "Sasuke versus..." ones; they felt funnier. I didn't appreciate the multiple advertisements for Naruto-related video games and art exhibits and stuff.

I've realized I don't care for "straight-man" style humor, where someone (in this case, Suigetsu) overreacts to the oddities going on. It's like the manga version of a laugh track. If something is genuinely funny, I don't need to be prompted to laugh. And if it's only mildly funny, throwing a straight man's reactions into the mix doesn't much help. Theoretically, a straight man could probably be used effectively if it's done rarely just to add that extra punch to a joke, but at the very least I don't think this manga makes use of that technique very well. It just comes across as more annoying than anything.