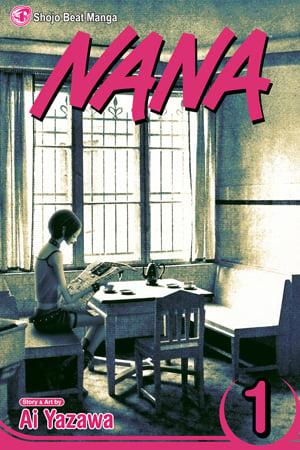 Some of my favorite mangas are shounen like Bleach and Naruto, however NANA has found a VERY special place in my heart.

Story: Nothing gets much better than the story that Ai creates. Everyone wants things to end happily for every character, but this isn't one of those stories. It's real, heartbreakingly so. The main characters get put through the ringer emotionally because they aren't experiencing a "manga life", but life as we know it. It's real, it's unabashed, it's awesome. The story also doesn't focus on one person's journey but the two Nana's stories and the people they meet through it. You'll be smiling, laughing, crying, getting angry, and literally be at the edge of your seat while you read.

Art: If you have read Paradise Kiss, then you would already know that Ai has an impeccable eye for detail. Every character in the story is beautifully drawn with distinct facial expressions. The clothes are outstanding (again Paradise Kiss would have clued you in) and actually defines the personality of each character. And when Ai wants to do a landscape scene in which the characters aren't the focus, she does it so well.

Characters: AH.MAY.ZING. It's simple really. THey are not perfect and are all flawed in a very real way. Of the main characters Nana K. is an irresponsible, hopeless, romantic who, out of her need to be loved, is a bit selfish and always getting heartbroken. Nana O. is the opposite, fiercely independent, possesive, and driven, she is willing to put her own relationship on the backburner for her career and pride. And those are just two characters. These characters are so well written that they are the driving force of this manga. Their actions, and not the world around them, make this manga, much like how real life works.

Overall: I can only rave about this more. Simply put this manga is great. It really is a joy to read. My only thing is that the author was VERY sick and has just began recovering. She doesn't know if she will continue the manga which is DEFINITELY heartbreaking. I say still give it a shot because what Ai has given us is a beautiful story that hits all the right notes.

Due to the fact that I've heard the mangaka will not be continuing this story, I am going to review it. I've read the maximum number of chapters available and really hope one day she chooses to continue it.

The STORY of NANA follows two twenty year old girls who share the same name: Nana.  Nana Komatsu, who later becomes known as Hachi(ko) is following her boyfriend to Tokyo.  Nana Osaki, who gets to keep her name, is going to Tokyo for very different reasons: to become a punk rock star.  These two girls meet on a train and then coincidentally end up trying to rent the same apartment.  They become room mates and what ensues after is a stream of comedy, tragedy, love, loss and the pain of growing up and taking responsibility.

This story affected me personality because when I was reading this manga i was also a twenty year old trying to find her way in the world.  While I would never recklessly follow a guy to another city and am not aiming to be a punk rock star, I could relate to growing up and growing apart and losing friends and making friends and breaking hearts and getting your heart broken.  This manga appeals ot an older set, but I do believe that younger girls and boys would be able to get a great meaning from it as well.

The story is paced well and always keeps you on your toes.  You may predict that one thing will happen, but then the mangaka throws you for a loop and eventually you just give up trying to guess what's going to happen.  I really appreciated the sense of unpredicatibility.  This manga is very, very emotional, so you should be prepared for your emotions to be thrown al over the place.  If you're the type of person who cries easily in books or movies then please, keep a box of tissues near you.

The ART... well... I have to admit it: I'm really not a fan.  The characters are so disproportionately thin and their legs are ridiculously long.  Their faces also looked a little bit weird - they all had really large forheads and small chins.  Of course, the art did grown on me as I read on, but that may be because of the fact that I liked the manga so much.  I could completely understand if someone didn't like it at all.

I loved every single CHARACTER in NANA.  All of them.  Even the "bad" guys because they all added to such a thick and dark plot.  There were so many characters that it was easy to relate to, whether you relate to the innocently manipulate (irony, ha!) Hachiko, the stable Junko, the oblivious Shouji, the mysterious Ren, the good-guy Nobu, the misunderstood Shin, the cool headed Yatsu... the list goes on.  Each character brought something to the table and they were all connected, even if they had never met.  The characters were what really made this manga what it was.

OVERALL, I'd give this manga a 9/10.  Based on story alone, it's a 10/10, but I really couldn't appreciate the art that much and it brought it down a peg.  It is a josei, so I'm not certain how well guys would like it, but as an adult woman myself it was perfectly targeted for me.  Check it out if it seems interesting to you!

I love  Ai Yazawa's works, all of them are human and very relatedble (is that a word?)

Nana is THE manga, absolutely EVERYTHING about this work is just perfect. All characters are so well developed and you can see how they grow and change. Nobu will be forever my 2D crush 😭😭😭😭 Takumi remind me so much to an ex boyfriend that is scary 😒😒

But this manga have a HUGE defect......her mangaka is a f*** m***** who likes to play with her fans hearts and 'till now we don't know how the history ends!!!! 😭😭😭😭 And is not like it wasn't a big deal 'cus she was opening new paths to the history and still whit so many questions without answers .... WHY YAZAWA, WHY??!!

This manga an obsession of mine 😔