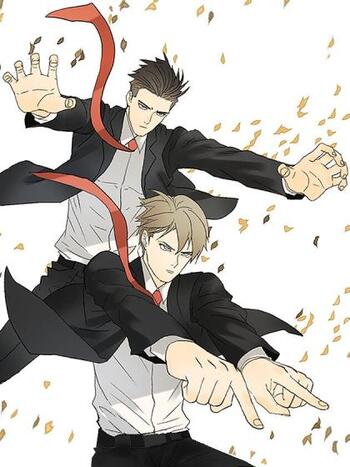 They have a similar art style and even though it's a slow-burning story you just want to keep reading. They also share a similar kind of humor.

Both manhuas have similar artstyle and I think the authors of the manhua are acquainted irl (they have a cameo appearance in the manhua lol) and both are about a set of friends that is stuck with each other together with their craziness that will make you laugh so hard that your stomach will ache.

Both have the same kind of comedy and goofy interactions between characters. Nan Hao Shang Feng is more about a friendship while 19 days focuses on a more romantic relationship.

Both play with the theme of BL but not really.  Often falling into misunderstandings about their relationship and sexuality, and comedy as well.

Both have teenage boys in highschool who are often put in comical situations though 19 Days does have a darker undertone to the overarching plot. Short chapters.

They're very similar in terms of art and humour (especially with the first portion of 19 days). 19 days has developed a more serious plotline as it continued but at it's core it still shares the traits of being about a group of boys getting into ridiculous situations together

It has very similar dynamics humour wise. The friendship are very similar, although 19 days follows two couples. The main couples of both series have very humourous relationships, very much tom and jerry energy. However, there is a slight romance undertone, that seems to be a side plot to the main humourous slice of life plots. Which is perfect if you need a chuckle but also want speckles of character and character relationship development. The artstyles as well are very similar, it's actually quite intriguing with how they shade and colour the characters and environment. 10/10 for both stories!!!

Although Nan Hao Shang Feng are more episodical rather than a storyline with plot as with 19 Days, they have Shounen Ai and the tension is real. Nan Hao Shang Feng focuses on comedy than 19 Days, which has a more impacting dialogue with overarching character development.

Back EMBED THE SNIPPET BELOW IN YOUR SITE Enable collaborative features and customize widget: Bing Webmaster Portal Back

When Sun Jing in Affiliated No.2 Middle School encounters with Qiutong of South Middle School, a small episode makes Sun remember the girl whose smile as warm as sunshine. Their schools are adjacent, so Sun Jing always meets Qiu at the bus station. He starts to keep an eye on the girl and they become friends since then.

Both manhuas have similar art styles and humour. They're both very laid-back and light-hearted with lots of comedy. Although one has a more romantic angle to it if you like one you might like the other.

because i read both

Similar art styles and humour. Both are slice of life manhua's. SQ: Begin W/Your Namel however is a wholesome yuri romance, and Nan Hao Shang Feng doesn't involve much romance.

They have very similar simple sense of humor, including the art. both follow friend groups and their love lives. But SQ is more leaning towards romance and Girls love and Nan Hao Shang Feng is more of slice of life and comedy. fo rpeople who are getting into girls love for the first time SQ is a good starting point. SQ unfortunatly has stopped progressing due to problems with the Chinese government and author but I would still highly recomend you take a look at its existing chapters, the author now updates art work from time to time.

High-school boys are really simple and curious creatures. They want one and only one thing: girls. But they haven't got a clue about them. Male teenagers are dumbfounded by the girls' thought process, actions, appearance and everything in between. They spend countless hours amongst themselves discussing and arguing their theories which are usually completely off base. If only they had the courage to ask them instead of screwing around and talking about nonsensical things, they might get somewhere.

Both of them feature highschool boys as their main cast. The type of humor is also similar and both of them are great in finding ways to make you laugh, they're simple yet witty at the same time.

Both are similarly about what can only be described as boys being boys. However, Daily Lives of High School Boys has a more diverse cast, both are comedic and a joy to read.

The comedy, reactions, and all around wackyness remind me of those adjectives from 10th Dimension Boys, so I think this is a perfect recommendation.

It is the Edo period, an era when samurai are still of great importance - at least they used to be, until all sorts of aliens called the Amanto decided to take over the government and revolutionize Japan so it wouldn't be so uncivilized. In Edo, now a city where anachronism is the rule rather than the exception, Gintoki, a former samurai, tries to make a living doing odd jobs. During the course of his work, Shinpachi, a would-be samurai; and Kagura, an absurdly strong girl, join him. Of course, he has them work for free, how else would Gintoki be able to buy Shonen Jump and strawberry milk, let alone pay for unimportant things like rent if he has to support someone other than himself?

- a quirky cast that play off one another

if you liked the lighthearted fun of Gintama then it's likely that you would also like Nan Hao... as its even less serious counterpart

Zoo in the Dorm

It’s the beginning of another year at Mei Academy! Freshmen guys and gals venture out into a life of many possibilities, creating unique roommate tales of humor and school life!

At well-known University 985, there's 320 dorm. Because the four people in the dormitory have different personalities but all look very handsome, they are known as 320F4. Here is their little story.

This story begins from an ancient empire in the East, you will meet the dreamy Twelve Zodiacs, hundreds upon thousands of monsters and beasts, as well as their leader the Seventh Lord of Destruction. So take a ride on the Silver White Ark, and go off to explore the mysteries of the world...