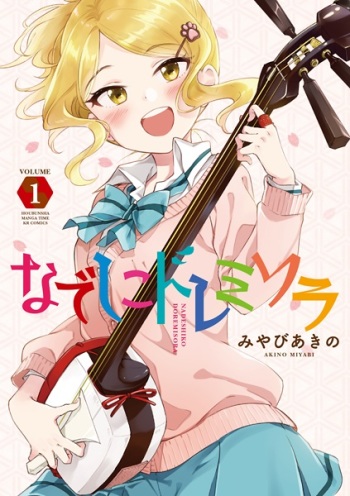 Yohei is in the Woodwinds Orchestra at his high school where he plays the clarinet as one of the few boys in the group. The president of the group is Azumi who also happens to be Yohei's first girlfriend. Azumi has never had a boyfriend before, and the couple has many awkward moments as their relationship is still fresh. With both Yohei and Azumi acting a little shy with each other, being intimate is difficult but their love for each other makes them braver.

Hosaka Mao's never stood out. Her father's a washed-up rock-and-roller. Her hair reminds people of Pippi Longstocking. She's nowhere near the in-crowd. The arrival of long-haired beauty Hasekura Yokiko changes everything...

Takurou Hibinuma, a third-year in high school. He is a boy who gets bullied, and has no talent in studying or sports, but the only thing he can call his own is "rock." He experiences many things through music, and aims to become a rock star

Hosaka Mao's never stood out. Her father's a washed-up rock-and-roller. Her hair reminds people of Pippi Longstocking. She's nowhere near the in-crowd. The arrival of long-haired beauty Hasekura Yokiko changes everything...

Kasumi Toyama has always been captivated by the "beat of the stars". Since then, she’s been searching for something… a spark that’ll excite and thrill her! Following a trail of star-shaped stickers, she soon stumbles upon a Random Star guitar at her school mate’s house! Could this mark the start of something amazing?