My Status as an Assassin Obviously Exceeds the Hero's - Reviews 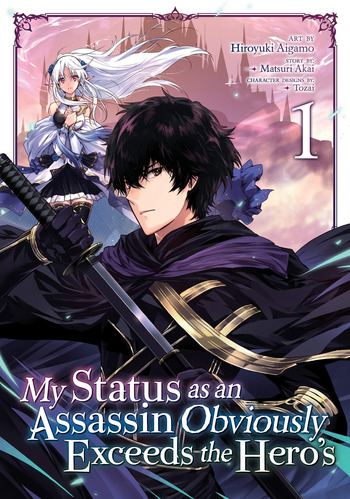 I really like Akira's hair. And all of the monsters are really well drawn. The art in general is easily the most appealing part of the manga, with me not really having any complaints about it. But the main character, Akira, on the other hand isn't very interesting. Fe just basically turns being antisocial and standoffish into a superpower, which makes it feel like this was a power fantasy for loners. Tsukasa is somewhat of an interesting character simply because fe feels slighted, which is sorta cute. The plot is pretty basic--Akira levels up by fighting monsters in dungeons and will use that power to fight against the underhanded plots of those in power.

Shit..   Damn fucking shitty author....   He obiously has the power to kill and avenge the comander yet he says hes too weak whilest he have max level stealth to scape after killing and has a high damage...   This is really the worse..  I can see retards working on this piece of shit....

A scenario with questionable scene...  Rather not put up a roof if you dont have post and wall...

Why did he just kill the king and scape. With grief and anger filled heart and an absolute scape skill. He could just kill anyone....   So i presume the athor wants to extend the fight with the enemy with a shortcut but leave a huge hole...   Its beter if he try but failed his assasination.....       I work done poorly once will definetly be made twice to a hundreths...    I liks the story but the train of thoughts for what i mentioned had poked my reverse scale...

If you want a Generic, Isekai, overpowered MC story this is it.

Our hero along with his entire class gets transfered to another world. The King has summoned these brave warriors, but the King also seems fishy. Our MC in this new world is an Assassin class and is ofcourse OP from the start.

The story does have a few interesting elements to it, Unlike other generic Isekai anime it automatically doesn't go the MC get a Harem route. The MC get framed for murder and has to run away, all his classmates (not friends cuz he was a loner, i know shocking right?) have been brain washed with the exception of one guy. Now he has to run away and find a way to clear his name.

I Recommend it though.

This is exactly what you think it is, An Isekai Power Fantasy, just different enough for you to read the 1st Volume. After that you can decide if you wish to continue this series.

Read Volume 2 and it doesn't get better, it just gets more generic, SPOILERS AHEAD

MC goes into the dungeon to level up, there he meets a beautiful Elf, who has been exiled from home.

Surely this Elf Girl has a rich backstory............ no. She has different color hair & nobody liked her in her Elf Hometown, BUT no need to worry MC is nice to her, the first person to ever do that, (I am Shocked). Now he has a girl to travel along with.

The art is amazing, and it is somehow even better during fights. The first opening arc is really really good as well. But man that elf arc was a pile of garbage. Bad writing, bad characters, dragged out what could have easily been 1 or 2 chapters into 8, which is criminal when your a monthly manga.  The conclusion to the elf arc, as well as why Amelia is hated by her sister and thrown out from her kingdom, is honestly so poorly written and unbelievably stupid I nearly dropped the entire thing. Basically wasted an entire year on it's a misunderstanding but also has zero foreshadowing and buildup and is just hard explained and thrown out of literally nowhere to just solve it all despite the arc's length. I won't give any specifics because the elf arc is basically half of what we have in total as of writing this, but I'm only not dropping it for the art and hopes that it stops being a steaming pile of trash in the next arc. Despite giving it a 5 the elf arc is like a 3 at best.