My Sister, My Writer (Light Novel) 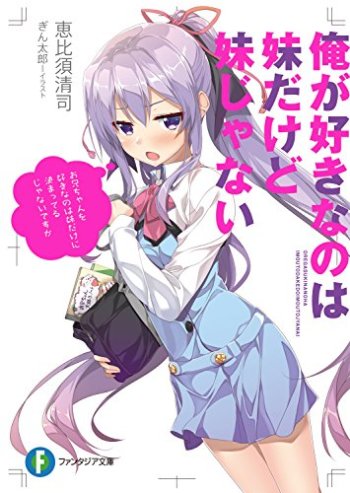 If you're looking for manga similar to My Sister, My Writer (Light Novel), you might like these titles.

The "new sibling romantic comedy" revolves around Masamune Izumi, a light novel author in high school. Masamune's little sister is Sagiri, a shut-in girl who hasn't left her room for an entire year. She even forces her brother to make and bring her meals when she stomps the floor. Masamune wants his sister to leave her room, because the two of them are each other's only family.

Writing light novels isn't all that easy, especially when you're in high school...and you have to do the cooking and the chores for your shut-in stepsister who's hardly come out of her room the past year! In the light novel business, it's crucial to have the right person illustrating your books to help them sell--and maybe get made into manga and anime! But in a world of online pen names, the author and the illustrator may still not even know each other...until one day they realize they've been living in the same house all along!

My little sister loves me so much it’s scary… no, seriously. My sister—Namiki Shuri, is definitely a very charming girl. She’s got intelligence, she’s got beauty, she’s got style. But just look at me, I’m just some extra-ordinary mob. Now the problem I’m facing is that this sister of mine loves me way too much. In my third year of middle school, I found the Onii-chan Notes in Shuri’s room: A detailed log of my every behavior. Not to mention when she was usually so cold towards me, lo and behold, she was head over heels in her notebook. Oh, let’s not forget, my discovery that there were surveillance cameras and listening devices hidden around my room…! In the summer of my second year of highschool, I learned of Shuri’s plan to ‘Lock up Onii-chan, and make it so he can’t live without me’. I made my decision. Then and there. To interact with Shuri as a brother—nothing more—and stop her before this goes too far—!

Sora and Tatsuki are stepbrothers whose parents died in an accident. Since then the elder brother, Sora Mukaihara, has brought up the younger one, Tatsuki Mukaihara. Now Sora is a very popular mystery writer. Tatsuki who has moved out on his own, is now an editor of a women's magazine. However Sora can't stand being alone and spends all his time at Tatsuki's. Tatsuki feels guilty because he can't stop himself from loving Sora and decides to live a solitary life. Then Sora asks to have Tatsuki assigned as his editor when he agrees to do a series of interviews for Tatsuki's magazine.

Junior High School student Takanashi Shuusuke has a problem. His childhood friend Iroha has returned with a massive crush on him. And so does class president (and yaoi fanatic), Mayuka. While Shuusuke must choose between them, his biggest problem is his younger, adopted sister Nao, who has become jealously possessive of him. As all three girls vie for Shuusuke's attention, he soon learns that all is fair in love and war!

A Sister's All You Need (Light Novel)

Itsuki Hashima is a novelist who's hopelessly enamored with the idea of little sisters and is constantly surrounded by colorful characters. A world class genius and love-guru who's beauty almost seems a waste on her. A girl who's constantly troubled by her friendships, love interests, and can't even find refuge in her dreams. A ridiculously talented illustrator. Each of them have as many problems and worries as the next and they never have a dull day together as they play games, travel, and work together.

Taiga works at a publishing company, and thanks to his sister's sudden marriage, author and Taiga's best high school friend Shu has become his brother-in-law. But then his sister suddenly disappears! Left behind, Taiga ends up taking care of his little brothers and living against his will with Shu. However, their lively and raucous lives accidentally draw them closer together!

When Konoe Moyako and her little brother, Akira, were young, he said he wanted to marry her. Naturally, Moyako decided that her little brother was a complete pervert who was obsessed with her. Now that they're both teenagers, Moyako is convinced she needs to 'rehabilitate' him. However, it seems that the 'perversion' is entirely in her imagination, and she can't seem to help turning completely innocent situations into creepy ones in her mind!