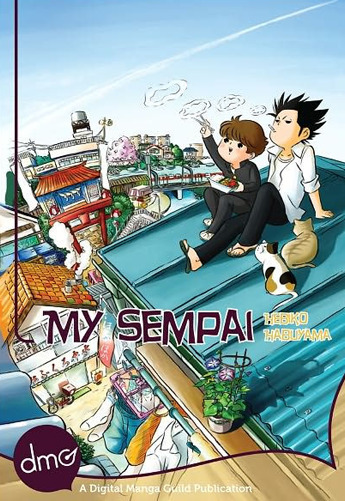 Ever since he was a kid, Morisaki Aki has been loved by the spirit of misfortune. And it's continued, even after he started high school! He is then coerced by his upperclassmen, Akabane and Tokunaga, into joining the gardening club. But as it turns out, that was just a cover for... the Loan Shark Club! He gets involved with upperclassmen that not even the teachers would want to cross. And thus begins his unfortunate high school life. However, unbeknownst to him, mysterious feelings begin to bloom. These three guys with their clashing personalities grow together to paint a bold graffiti tag of teenage angst!

These Are The Hungry

Life doesn’t always go as planned. High school sophomore and star catcher Itoshima devoted every fiber of his being to baseball, only to have the cruel mistress that is fate rip his one love in life away from him, due to an irrecoverable injury. Freshman Saitozaki never dreamt that his beginning days of high school, what should be the prime of his youth, would consist of battling incompetent bus schedules, unsympathetic teachers, and punishments that put his very life at risk. He also never imagined having these strange new feelings that have arisen ever since Itoshima crossed his path in his time of need. Is fate playing another harsh trick on this hapless duo, or will Saitozaki and Itoshima take destiny into their own hands and rediscover how to laugh and love?

Fujioka accidentally stumbles across an upperclassman, Naoya, on the school roof. Then Fujioka's feelings of friendship develop into something more?

A senior and a junior have a love relationship...

Fujinami Kou is a high-school second-year who had lost his boyfriend, an upperclassman schoolmate, to a car accident an year previously. On the anniversary of Misumi senpai's death, Kou is dispirited and contemplating skipping school. Kakitsubata Saki, a first-year, sees him and offers help, assuming that he's ill. As Kou startles at the sight of Saki's face and mentions that he resembles "the person I used to go out with", the younger boy is instantly intrigued and resolves to discover his sorrowful, introverted upperclassman's secret.

One day, Ryou received a confession from his kouhai, Miki. Despite receiving a blunt answer, Miki did not give up but rather, insisted on following around Ryou everyday, thus starting a game of tag between the two of them. But who is actually chasing who?

Hoshino is a timid grade school teacher. Sudou was one year his senior in high school. They meet again for the first time in over a decade and discover that Sudou's son is Hoshino's student. The two of them try to figure out how they feel about each other, and try to remember what it was that had brought them together and ultimately drove them apart in high school. They're both different, but that may not matter as much as how they still feel about each other.

Kaji Ryouta, who aims to be a photographer, is currently living with his creative upperclassmen. This person who appeared at his studio appartment and unexpectedly ended up living in his room was someone Kaji admired in high school, someone he fell in love with, confessed to at his graduation ceremony, and was spectacularly dumped by -- upperclassman Miyata Makoto. That person. And...? Kaji starts his second love in this omniverse series that details the sparkling emotions of those that surround the two.

It's Yuzuru's last year of high school, and he still doesn't have any friends. In fact, he's almost invisible to everyone's eyes... The people who do notice him even call him "Ghosty." One day, he becomes friends with one of the most popular kids in school, Kyoya. But, Kyoya's idea of friendship isn't exactly what Yuzuru expected.... While Yuzuru struggles with this new-found "friendship," he realizes that behind all his popularity, Kyoya feels alone, too. The two opposites are soon drawn to each other as they see that they actually do have some things in common....