My Next Life as a Villainess: All Routes Lead to Doom! (Light Novel) - Reviews 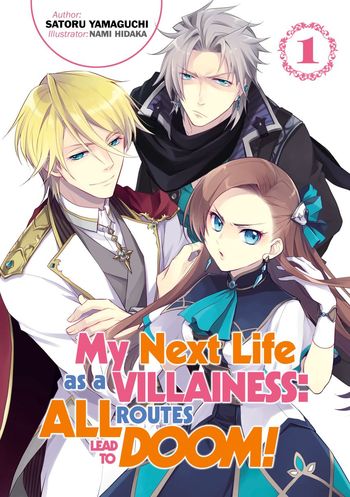 The plot is the generic "i was sent into an otome game i was playing and now i'm the annoying villainess". The beauty of it though is how it was executed. Katarina isn't overly annoying to the point where you'd want to drop the whole series (but she is quite annoying), and all the other main characters just makes you want it to be an actual otome game from Katarina's POV. All of the main characters (capture target or not) have great personalities that lets Katarina's annoying ways be swept away. Totally recommend if you like otome isekai!

If you like the anime the story goes into the background characters deeper.  If you don't know the anime, its a reverse harem romantic comdey that has good character development.  The author gives youan occasional chapter with another characters view of the scene explaining what happened from there view, especially Prince Jeord.  It broadens the character develpment that really is not possible in the anime.  The stories are in line with the anime and you can see how later volumes will easily be adapted. As the volumes that have action the action is done fairly well.  They are developing Katarina's relationships just very slowly and they still have romantic mishaps.  It does seem that the author is expanding love interests for Maria although Maria still worships Katarina. The biggest negative to the series is that the books a so short yet the price is fairly high.