My Life as a Loser - Recommendations 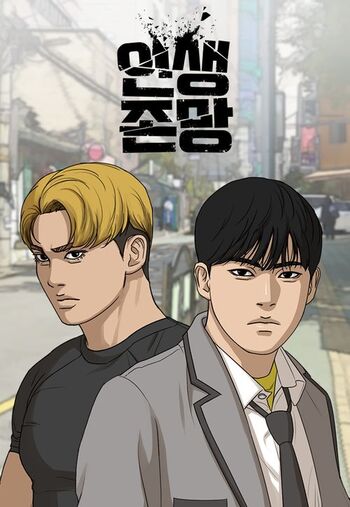 If you're looking for manga similar to My Life as a Loser, you might like these titles.

It's from the same author (but different artists), so they share a lot of elements.

First of all, the type of humour is the same, which I appreciate. It also deals with a weak guy becoming strong (kinda?), and taking over bodies and all that jazz. Overall, they share a very similar tone and if you like one you should at least be okay with the other.

The director of both of them is the same which is why the humor is also similiar which is nice (although the artstyle is different as the artist is the boyfriend of the creator of True beauty) There are reference to viral hit (one of them is quite obvious too) which is a comic that was created by the author of lookism too. An insane amount of plot twist which always puts you on edgeOverall very nice and the ending is one of the best ending the world of comic has to offer.

A man who has lost his beloved family. A desperate time travel to save his family begins.

Dajun is bullied every single day at school. Desperate, he believes taking his own life will end his torment but soon realizes it's not him who deserves to die... it's all the scumbags in this world. And when an incident with his bullies forces him to have to fend for himself on the streets, Dajun sets out for revenge. To do so, he’ll need to become strong. But he quickly learns that school bullies aren’t his greatest enemy… he’s now got bigger fish to fry.

Dai gets brutally bullied at school. One day, his mother gets killed. Although he may be weak, Dai seeks for revenge.

After getting revenge for his older brother, Kang Hyuk's story continues...

The Queen: A Silent Classroom

A queen with an entire class in the palm of her hand, striking fear into the hearts of her subjects with a single glance. 'This is wrong,' they think to themselves - 'This is not fair. We are all equal.' - so why is it that not one of them speaks up? If silence is our answer to tyranny, then who will help the helpless?

How to be Good

The "perfect" girl Noa, known throughout school for her good behavior, gets kidnapped after school one day. But things don't quite go the way her kidnappers had planned... What will happen when it's no longer Good vs Bad, but Bad vs Bad?!

Day after day, honor student Hwang Dong Wook gets called out by the bullies in his class to serve as their punching bag. Day after day, the last-ranked student Choi Yool is shunned by her classmates because of her beauty and her grades. As it happens, the sullen boy and the carefree girl sit next to each other in class. When the top student is asked to lure her into the bullies dirty shemes, their lives take an unexpected turn...