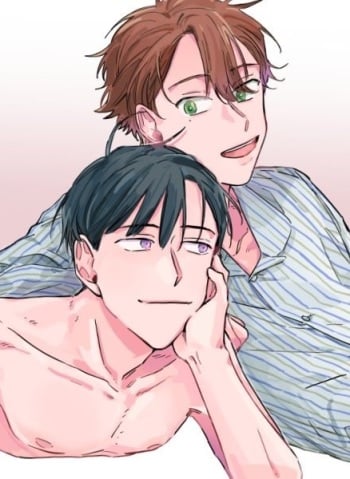 Sangho’s deadline for his PhD thesis is looming near and his future is looking murky. The highlight of his day is smoking on the rooftop of his school building, where, for a few blissful minutes, he can forget about his troubles. But his precious cigarette break is ruined one day by a guy named Hakdo and his bawling ex-boyfriend (who also happens to be Sangho’s ex-ex-ex-boyfriend). What’s more, Sangho later learns that he and Hakdo have not one but many exes in common. This gets them talking and the two agree to have some fun, casual sex. But little does Sangho know that Hakdo’s idea of fun is very different from his...

University student Kanade Shiiba has had a tight-knit relationship with his overprotective friend Munechika since they were babies. Although they cherish each other dearly, Kanade has resigned himself to the belief that they can never be together romantically because Munechika is an alpha and he is only a beta... or so he thought. He suddenly becomes feverish one day and his body goes into heat, and Munechika is there to take care of him. Now that they both know Kanade is actually an omega, how will their lives change?

Love in a Rush

Park Gun-woo lost a bet to his friends and as punishment, he gotta buy something in a shop named RedQueen. Then somehow Gun-woo started to have some feelings for the owner of the shop. He kept asking himself from the very beginning whether that feeling was love, and it never occurred to him before that someone with that fancy fortune and appearance would ever fall for him. With all the mixed feelings in mind, he still couldn’t help walking into that shop once he got any chances or good excuses. Is it possible that owner the right one for Gun-woo?

Normal 21 year old college student Ara has been close friends for 15 years with a hot guy that catches the eye of all girls, Kyung Hoon. More comfortable hanging with him than any other girl, this is the story of love that begins with this one male friend.

Nothing went the way I wanted it to in my life, until... she gave her everything to me!

Kei Arimoto and Makoto Ohtaki had been bosom buddies since middle school, but their relationship begins to change as college forces the two to spend more time apart. Kei is using all his wiles to take their relationship to the next level but Makoto continues to resist a more physical connection. Can Makoto finally acquiesce to Kei’s advances or will he find his soul mate stolen by a formidable rival instead?

Jihoon is the last person to be seen with a girl. He's spent his entire life turning down girls because his heart simply does not skip a beat for any girl. And then there's Sol, whose heart beats for every man out there. Serendipitously, the two meet at their college orientation, and whereas Jihoon finds himself helplessly in love, Sol finds herself able to breath in the presence of a man for the first time ever. Jihoon needs to win her heart, but he can't even speak to her without blushing or stuttering. Luckily for Jihoon, his friends come up with a devious plan to bring Sol and Jihoon together. Will the plan work?