My Instant Death Ability Is So Overpowered, No One in This Other World Stands a Chance Against Me! ΑΩ - Reviews 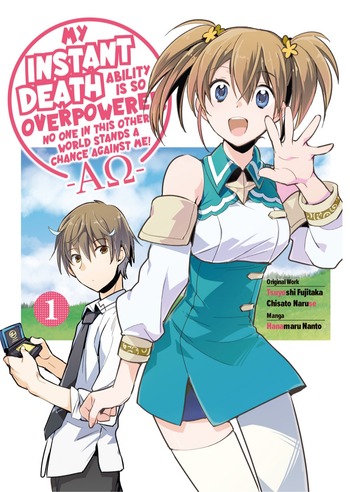 It's hella awesome isekai manga which is new in its genre with a dark humour tone and OP,calm,cunning MC.Well OP should be wrong to say its too much OP.

Here MC is inborn with ability to kill any object (that he defines to be alive) anytime if he wants(advanced version of death note),which he uses in the isekai world to survive.He just wants to live peacefully without bothering about anything but that does not happen in the isekai world as everyone attacks him, underestimating him as a weak guy due to his wrong status that does not show his full abilities.There is also FL who is annoying,but she adds great comedy to most of the scenes.

In most of the chapters, a new character is developed and buffed to the point where they look overpowered but to our dismay,they all get killed within a snap of finger by our mc and that makes the moment hilarious.Our mc also not let the hot bishouojos alive if they are enemies.But then also our mc remains sane and humanitiarian even after massacring.He tries his best to negotiate with enemy in their last moment but most of his enemies in the isekai world are not sane as they consider the values of live very cheap.

Art is not that nice in few chapters especially most action panels .Some informations are not stuffed from the LN in the manga that left the readers confused most of the time.

I highly recommend to give it a try.

TLDR: Read it if you are into isikai manga
Sokushi is about this guy that can just kill anyone with a word. An enjoyable read if your into that fantasy stuff, and surprisingly not so much a power fantasy as following a board guy do things. The real meat and potatoes is the dark truth behind the supposed all-powerful "saints". They bring people from the otherworld for powers, kill the weak ones, and then use the remainder as tools for there own biding. They seem to have no regard for human life, and even give the "heros" an aura that makes them stronger but also lose their humanity. 3 quarters dark and interesting, 1 quarter generic and boring.

Do you love konosuba + one punch man and SCP?

then this is a manga for you!

(No, but seriously this is not a generic manga. Don't trust the cover)

Not the most interesting character, the female lead is a little pretentious. However I enjoy the concept of a MC completely skipping battles because if he wants someone dead, that's it. They are dead. It could be better if there was further exploration into the question: should you kill? do you deserve to?

Otherwise it's pretty average. not a waste of the time i spent reading.

IT IS A SPOR OF ALL ISEKAİ MANGAS. Read it and you ll understand what ı mean by soup.