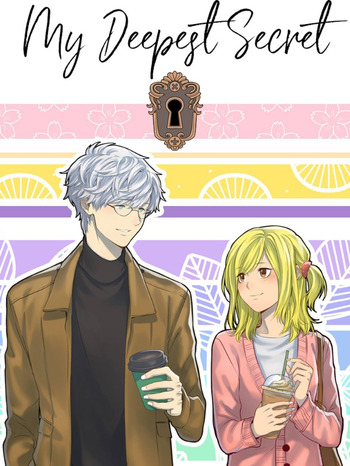 Go-Eun Ma has helped run the family’s haunted house since she was a child, even since her mother passed away tragically years ago. But over time, the exhibit has become run-down, tired and has few visitors, and is set to be demolished within the year. To help prevent this fate, Go-Eun hatches a plan - she’ll travel to America to visit the notorious Ghost Jack’s House, where staying for 15 days gets you a massive million dollar prize… that is, if you manage to survive and stay sane...

Idk why but these give off very similar vibes - romances peppered with kind of wild horror stuff, v good

Garden of the Dead Flowers

When Mila woke up, she suddenly returns to the past in Batavia during the Dutch colonial period. She accidentally saw her grandfather at a young age, kill a girl! Her grandfather, who she thought was nice, actually killed girls in his garden and planted them into flowers.

Both stroies have a yandere male lead who is a murder. They are both intially unaware of that fact and love them. With Garden of Dead Flowers her love in platonic at first while with My Deepest Secret they are already in a realtionship. They are many secrets and twist, that suround both the mc and ml and both mc are tyring to figure out what is going on. Also both ml have blue eyes.

Several years have passed and my parents were gone, it's he who, the man of no kinship with me, was appointed the only successor of my parents' company and real estate. Samson: Till the day she is 18 years old. I won't be her guardian any more. According to her father's will, all will be over. And I will become her legal husband.

Sam and Maggie are a normal couple, in a normal house, in a normal neighborhood. There is nothing strange about their heads, their neighbors or their sweet little dog. Everything is Fine.

The sad growing-up story of a pair of orphans dependent on each other. "I want to protect you forever and ever, because we have no other loved ones in this world"

Zylith is an 18 year-old aspiring artist who is taking her first steps into adulthood - she's getting her very first apartment! Actually, she has little choice in the matter since her parents have thrown out her belongings with a note attached wishing her luck surviving on her own. She finds a room for rent that's super cheap and jumps on the opportunity, but the landlady warns her that the place is haunted. Intrigued, Zylith signs the lease on the spot and her new life of paranormal activity begins. Just who is this handsome boy who looks like a k-pop star, and why does he keep appearing and disappearing before her eyes? One way or another, Zylith is determined to find out!

Unexpectedly, he has reached an agreement to murder someone in exchange with a "psycho". Then he is afraid, scared, threatened but unable to escape. Like, he' s addicted or fell in love with that "psycho". Collapsed, crazy, mysterious. Characters: Scheming tsundere psycho X cold heart college student. Please appreciate this dark and pure, sweet and sadistic story.

Scary and mysterious ghost stories. You're going to get cursed, once you listen to them…

If you could find out a little something about the future, what would you do? Get rich off of the stock market? Use the media to become famous as a prophet? Or…