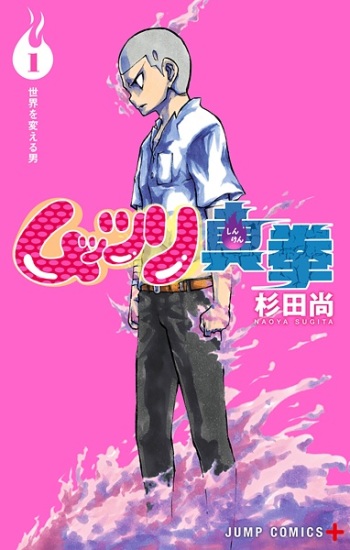 Welcome to Hell! There are two types of people here: sinners and tormentors. Their roles seem clear… until the day Kiyomasa Miyoshi arrived. Though he is a sinner, he came to Hell voluntarily looking for a good challenge. So far, no demon can stand against his might. He wants to fight the King of Hell, but only tormentors can get in to see him. So Kiyomasa will train the sweets-loving tormentor called Gokusotsu to become the supreme tormentor, who can then get him in to fight the King! A battle manga unlike any other commences!

After the assassination of the powerful Godfather, Don Pazolini, the world has been thrown into chaos. Many mafia try to fill the power vacuum, but there is a rumor that Don Pazolini's son is hidden away somewhere. That son is Nero, an orphan who is raised in a bar with showgirls as his friends. He dreams of one day finding his parents, but he doesn't know who they are. One day, he encounters a haunted baseball bat, who names himself "Pucchi" and refers to himself as the Pazolini family 'fantasma.' Pucchi insists that Nero come with him to become the new Godfather and rebuild the Pazolini mafia family. Nero is reluctant, but quickly realizes he has no choice, since there is a price on his head and his identity is no longer much of a secret...

Haizuka just wants to live a normal life, a peaceful life far away from all the trouble he's faced. But as soon as he starts highschool, an encounter with a girl and a strange creature destroys any hope of a peaceful life.

Ariyuki is standing in front of his former home which happens to be destroyed by a meteorite. Among the ruins he finds a gem which frees a young girl. The girl claims to be a god and is willing to grant him his dearest wishes.

Luchiru is a Majin who lives beneath the surface of the earth. He was sent to the surface as a spy to gather information in order to defeat the humans who are living there. But the problem is that Majins have a different understanding about humans; they strongly believe that the Human Race is far superior to them in every sort of way, but in fact it is the other way around. How can Luchiru survive in the Human World where he has different point of views on the strength of humans, which he strongly believes that with just a touch would make him combust and be disintegrated in an instant?!

It is the manga Umezawa made before his very succesful follow-up BOY and which tells of the adventures of Hibino, delinquent son of God. God gets enough of his son's behaviour and sends him down to earth to better his life and test him. The outcome of this will determine the future of the world, because God won't have his son succeeding him if he doesn't better his life and will end humanity if Hibino fails.