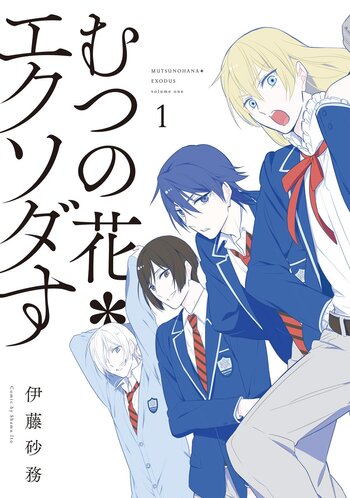 When Chinatsu joined the student council, she found it wasn't nearly as cool as she had expected. The president just slept all the time, and the vice president just did paperwork. There was no fighting evil, no sex appeal... just normal school stuff. It's up to Chinatsu to liven things up!

High school student idol Ena Takahashi has a hobby she can't tell anyone about... and that is listening in on the ridiculous conversations of class representative Nara-kun and the plain boy Mikage-kun. If her secret is discovered, people's trust in her will be destroyed! She wants to retort, but she can't! The eavesdropping short-gag manga full of tension and guilty conscience begins!

A spin-off of Mitsudomoe, this series is comprised of single-page chapters that could not be published along with the original manga.

The conversations and daily shenanigans of three schoolgirls. Mina is lively and gets into mischief; Yukari is the class rep and usually follows Mina's lead; and Sanae is a member of the track club whom, unlike her friends, prefers to stay cool and act rationally.

Naruse Hiroya is an ordinary high school student, but his normal daily life is often ruined by his friend Kokutou Miyabi. Miyabi has an intense personality, and he constantly drags Hiroya and their other friends at school (level-headed Wasshi and Katarun of the vision-obscuring hair) into the most ridiculous situations!

The student cast are doing a radio show answering fan mail on the air while in the staff room, Fye, Kurogane, and Yuuko have the radio show playing over the loud speaker as Yuui does his normal teasing of Kurogane, including having a song that he secretly recorded of Kurogane singing in the bath played on the radio.

Takamizawa Shinichi has just transferred schools and is staying at the male dorm with his new friend Kato Masaya who is showing him around. He tells Takamizawa that he needs to pay his respects to Intel who oversees the male dorm housing. It turns out that Intel is a person who looks to be a pretty girl who seems almost machine-like. Although Intel has some human aspects, Takamizawa is puzzled by the truth behind Intel and, whether he wants to or not, he's about to find out more.