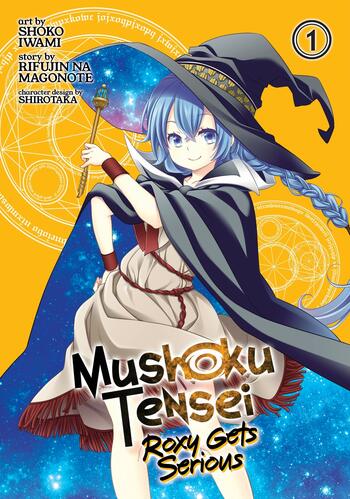 If you're looking for manga similar to Mushoku Tensei: Roxy Gets Serious, you might like these titles.

Fill was picked up as an orphan by the Great Sage who once saved the world. In a remote land for from civilization, he raised her as if she was his grandchild. Eventually, she was able to cast spells without chanting, and even defeat a dragon with her bare fists. However, the sage called out his granddaughter one day. “Fill, I never spoke about this before, but you are a girl!” Really!? By the way, what is a “girl”? Fill did not even possessed common sense, much less the conception of sex. Worried about her future like that, the sage enrolled her into the Royal Academy.

Solon, who has been exiled by his comrades, met the secluded and lonely princess, Philia. She believed in his words that ' as long as you have knowledge of magic you can be free.' With the request of his former mentor, Solon became the girl's private tutor. To protect the girl from assassins, they were sleeping together inside a room with a barrier. They went everywhere together, from choosing magic staffs to fighting ghosts. With that, Philia’s training as a magician has started, but it looked like the main figure of the Empire’s schemes was starting to move… A magic swordsman who was despised because of his versatility and inferior skills met the uncommon princess.

Before Hajime was transported to Tortus, the Synergist Oscar Orcus has his own adventure–but not willingly! Oscar is a simple working man, keeping his head down to earn his money and support an orphanage, until Miledi Reisen bursts into his life. She wants Oscar to join her in a quest to defeat the gods. Oscar refuses to chase after that kind of danger…until that kind of danger finds its way to him.

Shion, the ‘Hero of Darkness’, was said to be the strongest hero ever. He believed in one thing, and that was in his party members. He believed wholeheartedly that he'd defeat the Demon Lord with his party, but a tragedy occured. He was betrayed and left for dead by the very girls he trusted. He barely held onto his life, but the incident left a deep scar in his heart. He gave up on living, and while he was wandering around in a forest, looking for a way to die, a single monster appeared in front of him. The monster asked Shion, “Will you kill me, please?” What Shion, who wanted to die as well, did was...

A Tale of the Secret Saint

Born into a family of knights, Fia has always dreamed of following the path to knighthood too, except she's the least talented of them all. On the day of her initiation test, a deadly injury prompts her life to flash before her eyes...and reveal her former life as a powerful Saint who defeated the Demon King in a bygone era! Her painful death as a Saint made her swear she’d never accept sainthood and its dangers again. But now, with her saintly power returned, Fia has the chance to be a more powerful knight than she’d ever dreamed—that is, if she can last long enough!