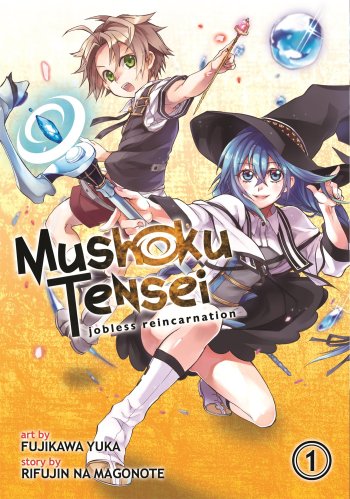 Light spoilers~
(Got up to chapter 24)

Summary: A 34-years-old NEET otaku is chased out from his house by his family. Unattractive and penniless, he finds that he has reached a dead end in life and realizes that his life actually could have been much better if he had made better choices in the past. Just when he was at the point of regret, he saw a truck moving at a fast speed straight towards three high schoolers in its path. Mustering all the strength he had, he tried to save them and ended up getting run over by the truck, quickly ending his life. The next time he opened his eyes, he was already reincarnated into a world of sword and magic as Rudeus Greyrat. Born to a new world, a new life, Rudeus decided that, “This time, I’ll really live my life to the fullest with no regret!” Thus, starts the journey of a man yearning to restart his life.
Currently: On going

I remember reading this when it had a couple of chapters, it was alright, it wasn't amazing but it was bearable. There were some parts of the story where I just wanted to neck everyone on site, because they were just so idiotic, an example would be on chapter 5, the dad decided to go and get the damn maid pregnant, Rudy literally guilt tripped his mother when he should of known that it would be better if they split up, to some people that might not really enter you mind, but as a child on where my parents relationship was based on constant cheating and mistrust, it isn't necessarily good for the children to bare witness to that and its better to move yourself from the situation even if it may hurt your children for a moment.

Also to continue, Rudy is a literal pervert, I can handle that and honestly wouldnt mind that much. But with Slyphie or whatever her name is, he thought about dating her when she was a child- isnt that technically pedophilia, I understand that he is indeed in a childs body, but to feel sexual intrest to a child despite having the mindset of a 30 whatever old is gross.

Theres a scene I believe around the 7-9 chapter mark (not certain) on where he watches that chick get beaten up and he's like 'okay- anyway.' I'm curious on why he thought that it was okay, I am aware it was to put her in her position and for her to stop being so snobbish and for her to look at him for help.
- Just reviewed one of the chapters and he just thought about having sex with her while she was bound- urk.

The only reason this review didn't end in a downright 0 was because of Philips ass and the mothers.

Overall, wouldn't really recommend. If you like it good for you, it isn't for everyone but it could be one of your future favourites so read up to chapter 15 if you decide to give it a try.

PROTAGONIST [ Slight details into the Sypnosis]

Our protagonist is a 35+ yrar old man that makes enough mistakes in his life to become the homeless bum you hear your parents talk about the story makes his death feel more or less like a mercy killing.

in his next life he uses his knowledge of his old mistakes to make himself more determined to become someone special in his new life.

Needless to say thanks to his experience he becomes a op prodigy according to the first volume however he is not too op he still have the needed weaknesses and struggles.

The characters in this story are all very loveable and have many struggles and development there is even a cool Notable twist in the story that i won't spoil about the race of one of the characters.

The protagonist and the characters all have great development after the end of the first volume where you meet some of them.

The story is also great and it is due to world changing event that happens in the story that forces the characters to change and get more interesting.

I can't wait to see why the event happened and how it was caused not to mention the fact that even if the protaonist reaches his current goal he will undeniably have a new one because....

Despite them trying to return home it is revealed in the most recent chapters that the home they were trying to go back to has been destroyed and all of the people who got caught up in it are lost in who knows where making their own private developments along the years.Many have not been revealed yet but its been 4 years since it happened.

Ladies and gentlemen, I introduce to you: The #1 coming of age story that I have ever seen in my entire life.

No spoilers! Yay! I assume you have read the synopsis.

First of all, I love this manga's take on the isekai genre. Normally you would have someone getting transported to another world, finding out 1: he has cheats/an overpowered ability, or 2: he is super weak, gets separated, and gets more powerful over time. But this story says no to thos two, and gives 3: starting life from age 0, not overpowered or underpowered, but just with one goal: to live life to its fullest. [story+2]

This manga also brings the coming of age genre to its fullest potential, showing a boy's life from the age of 0, growing up little by little, going through various obstacles in life along the way. I love how Rudeus' aging is incremental and slow, allowing the reader to follow along with his life. [story+2]

My third point: If you have came here looking for action, then I'm sorry, there is very little action, with an action scene about every 5 chapters. [story-1] Instead, there is a lot of drama, focusing on many different themes and genres, including family, comradeship, and romance. There are a lot of happy and sad scenes that can make you cry. [story+1] Also, the this manga has the tag harem, but I don't see any. There is some teacher-student relationship, some underdeveloped romance with a childhood friend, and this very well developed romance with another girl, but they always somehow disappear from the protagonist's life, and the protagonist isn't with 2 girls at the same time. So there are some important parts of a Harem like rivalry that aren't there. (it's not that I like harem, it's just that I don't get why these people are introduced if they just disappear like that)

There are a lot of nice plot twists in the story. After reading for a while, you probably think that you know what the story is going to be about, but you actually don't. There will be this random thing that happens and everything turns around. [story+2] However, sometimes the twist totally destroys the momentum built in the relationship development or in the plot. [story-1]

The art isn't too special. The only thing worth talking about is how the artists were able to design characters over various ages. The character design really shows how the person is aging. [art+2] They also do a good job at making every character look different, even though some of the hair styles are kind of generic. [art+1]

I think I might like this'un. Sure, it feels a bit like a Greatest Hits of isekai tropes, but I think it does a pretty good job making them feel like a natural part of this story. And, yes, it does have a harem, but it mainly sticks with three girls (Roxy, Sylphy, and Eris) and seems to be taking time to actually develop a believable emotional connection with each of them. In many ways, the romances are the core of the story and the adventuring and quests are just there to keep it fresh. It definitely has some low points in its storytelling (like with how it glosses over months and years of time or how overpowered and plot-armored Rudeus is), but overall I found it enjoyable and entertaining. And at least with the plot-armor, the most extreme examples are explained by Rudeus following Hitogami's advice. Hitogami is a sketchy god who seems to be trying to manipulate Rudeus to push fem down a path that would benefit the god in some unknown way. I like this aspect of the story--it creates a large-scale plot which we the readers have very little insight into but which we know is super relevant, and we don't know if Rudeus is being led astray when fe follows Hitogami's advice.

Rudeus sometimes playfully emotes with an otaku-style flamboyancy. This can be a bit annoying, but it does make the times when fe's more depressed punch that much harder. And it can make for some pretty funny moments. The one that stands out to me is when fe greets Geese in the prison cell while naked (ch. 31)--that's just a great comedic moment.

Chapters 1-15 are introducing the harem-mates and other loved ones and showing how prodigious Rudeus is at pretty much everything fe puts feir mind to. Chapters 16-52 involve years of traveling and adventuring across continents to try to reconnect with loved ones after a red ball teleported everyone in Fitoa to diverse and random locations; these storylines focus on Rudeus's romance with Eris. Chapters 53 to the present have been telling the story of Rudeus at a magic university; this storyline focuses on Rudeus's romance with Sylphy. In chapter 38, we are introduced to the princess Ariel and feir ascension tension subplot, which is currently being woven into the main storyline.

It's not a generic isekai. The story is interesting and entertaining. The MC will live his new life by according more importance to what he didnt in his previous life. Basically, his love interest and his family. It will be a big theme there. In fact the story is based on that so.

It's quite slow paced, it's not the basic slow shounen nekketsu like naruto. MC progresses through years quickly. In 70 chapters, he grew up by 10 years something like that. It's not a problem at all. It's better because it doesnt stretch out the story with some useless arcs or training that nobody wants to see. It's straight forward, you see the essential. The characters are very good too. They are not annoying or anything else. You will have a bunch of cute romance moments. To be honest, it's not that much a harem but I still dont know if the author will make the MC being in a polygamy relationship or not.

To conclude, it's an interesting isekai if you like family/romance theme. It was quite mature and serious. The fact that MC is an ex scumbag is not just a way to justify that he moves onto a new world, it will be very well used for example with the depression of some characters. It's very interesting.