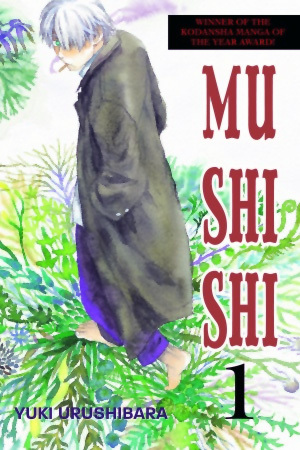 When you love an anime series and then decide to pick up the manga, I often find that a sense of trepidation creeps in and a voice whispers in the back of my head that maybe it won’t be as enjoyable. Despite my love for the television series’, when I first picked up Fullmetal Alchemist and Naruto, I wondered if the difference between the two media would dull my love for the animation. However, it’s not always so bleak, as every so often you stumble upon a manga that you know you’ll love from the moment you start reading, regardless of any feelings for adaptations. For me this has so far only happened four times: Emma, One Piece, Yotsuba&! and the first one of all to achieve this… Mushishi.

Mushishi is an entirely episodic manga, and follows Ginko, a medicine seller who specialises in phenomena caused by curious life forms known as mushi. Each chapter documents a new encounter on the protagonist’s travels, but while most of the stories follow the same recipe, the manga manages to save itself from developing into a repetitive monster-of-the-week series. In an effort to avoid becoming stagnant, mangaka, Yuki Urushibara, occasionally mixes up the format of her stories. Most chapters follow the formula of Ginko arriving in a rural village only to happen upon an intriguing mushi-related problem, which he then proceeds to solve. However, from time to time, Urushibara skillfully breaks up this monotone pacing by exploring moments of Ginko’s past or having the white-haired man becoming caught up in a predicament in place of some hapless villager. This occasional shifting of focus, while not a complete change of pace, offers up something a little different from the standard format of the enigmatic mushishi’s experiences, which becomes just as gripping – if not moreso – than the more straightforward tales.

While trying to fit an entire, self-contained plotline into a mere forty to fifty pages may seem ambitious, Mushishi’s individual parables manage to retain their ambling pace without skipping huge chunks of the overarching plot or abandoning all sense of characterisation. Certainly, Urushibara’s greatest strength lies in giving the reader a sense that they fully understand each particular setting and the lives of the various people whom Ginko encounters in a limited amount of space. Best of all, she manages to accomplish this without bombarding the page with an excess of wordy explanation or justification. Instead she cleverly utilises the layout of each page to include vast sweeping scenery and close shots of faces alongside internal monologues and key exchanges between individuals to create a slow-paced narrative that leaves you craving for just one more chapter.

Yuki Urushibara’s muted character designs work exceptionally well with the story’s humble setting incorporating no complicated or unnecessary decoration for her protagonists. However, at times some of her one-shot characters look increasingly similar to those used before and they almost meld into a selection of ‘villager number one’ type pigeonholes as a consequence. What I find most intriguing about Mushishi’s artwork is the evolution of the mangaka’s visual style. Her depiction of Ginko in the early chapters looks markedly different to his appearance in later volumes. With a slightly more cartoon-y visage at the beginning, as the manga progresses Urushibara settles in to her drawings, as Ginko appears more mature and polished – a look that works better alongside the tone of the narrative.

Utilising an equal ratio of screentone to hatching for her shading, Urushibara manages to successfully – and beautifully – convey a multitude of textures that truly brings Mushishi’s world to life. From the individual folds on someone’s clothing, to full-page spreads of landscape imagery, the detailed scenery contrasts beautifully with a simpler facial design. She also demonstrates an impressive use of layouts, employing varying sized panels while sometimes venturing outside or behind of those borders to express the magnitude of what is happening, or the sheer vastness of the setting. One thing art wise that I do dearly wish, is that Del Ray had actually included colour pages in their adaptation, as Urushibara’s gorgeous paintings provide an exquisite visual treat of which western readers have been robbed.

In a manga with so many “disposable” characters, Mushishi manages to do an impressive job of developing the various people that Ginko meets on his travels. While I may not be able to remember everyone’s name, within each storyline those central to the tale receive plenty of focus. The reader learns of their past and what they are like as human beings. Be they pitiable, admirable or even worthy of loathing, their personalities are so well established for the length of each parable that you want to know – and sometimes even care about – what happens to them.

Oddly enough the least developed character in the entire manga is its central protagonist – and only constant – Ginko. Though a couple of chapters delve into the traveller’s past, and his various interactions with people allow the reader to gauge a little of his personality, the white-haired mushishi remains somewhat of an enigma throughout. While in most series this would be a huge deficit, this actually works to Mushishi’s advantage. Much like Kino from Kino’s Journey, Ginko acts as an impartial presence, neither siding with the mushi nor passing snap judgements on the state of affairs. As a result, the protagonist’s persona doesn’t impose on the situation at hand allowing for a more concentrated focus on those he meets and their problems. Essentially, the manga simply follows Ginko, but is actually about the mushi and those it affects; if we learnt more of him, it would become merely ‘Ginko’s story’.

While it may not be filled with action or provide edge-of-the-seat reading where you daren’t blink in case you miss any of its awesomeness, Mushishi is truly one of the best series out there. Its slow and gentle nature weaves through the cornucopia of enthralling tales that – added to the stunning artwork – gives Yuki Urushibara’s ten-volume manga an understated grace. Certainly, for anyone who likes slower-paced or supernatural stories, I’d find it incredibly difficult to locate any other title that performs quite as well in every aspect as this.

As you well know by now, I love the occult and anything that has a sense of sophistication in its writing. I fell in love with the anime version of Mushishi and now I like the manga as well. The manga is pretty much the same as the anime, same stories, pretty much same time frame. People may think this is a let down but not to me. Since the anime was so good, the manga didn’t need to do anything in order to be as good and I think it would have taken away from it if they had changed anything. The stories themselves have sort of life lessons that we should take to heart and some of them are rather old lessons that we had to worry about long ago. Because the acts have happened because of ‘mushi,’ these strange creatures that act according to there desires, that it sort of speaks to today’s world as well. Since these creatures have no time connected to themselves, it means that they can be affecting us in this high tech world. Some of the stories are like the desires of people now a days, things like hunting to much that you are taken over or acting higher then you are because of something special you found out. Other stories are just things around you that you wouldn’t be able to stop and seem like explanations of why things have happened the way they did, like losing your voice, memories, or even losing your hearing.

Now for those who hate when the manga and anime are the same, fear no more because the manga goes farther then the anime. We get even more stories and it starts about half way through the sixth volume. Many of the stories are actually rather sad though we get small parts of comedy so that we don’t get to teary eyed. I really think everyone should read these around the time your about to go to bed or to get some relaxation because none of the stories are big adventure action packed stories. Many times, they are made for you to think about what the characters have said and meditate on the story. I personally loved having meditation music on while reading the manga as it sort of zones me into the manga just as the opening song for the anime would zone me into the story then.

There was a small thing that did annoy me a bit about the mangas though, and that is the little bonus pieces that for some reason the author decided to put in-between a couple chapters. They break up the stories and I found myself skipping them at times because I really wanted to read more of the actual manga. The bonus ones were ‘badly drawn’ compared to everything else and just got so hard to read at times that I just felt it broke the mangas. I believe most of them were supposed to be about the author’s life but still, I found myself not really caring about it since it was so hard to figure out if it really was from Urushibara-san’s life or part of the chapters, or even just random bits from someone else’s life.

The artwork is rather sketchy, sometimes looking like blobs without much detail and then there are other times that the background is really well detailed while the characters look bland and simple. I guess it helps the characters stand out but the characters deform a lot more then you would think. Chins are elongated, eyes have little to no definition of where they end and the rest begins, and even the clothing feel like little blobs at times. The times we get colored pages, the artwork is blobs of watercolor sort of merging together as though from a dream. I think it adds to the idea that these creatures we are reading about are things that we may only see in dreams and the imagination. As the books go on, the artwork gets better and better though still keeps its sketchy look.

I really like this manga, It's a manga who follow quickly a story line but each chapter it's have a new "mushi" .

The story are really good, it's not boring at all(even if they don't have big reversals of situations) because each time it's a different problem  but with the same main character and sometimes other second rank caracters appear two or three times in the manga.

The art is good but the character have basically the same face or the same mentally scheme so except for the main character i don't have specially like other people.