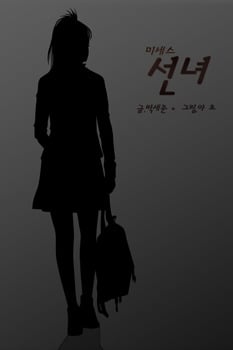 Living with The Wizard

Lilac is 26 years old job applicant. She just started the game and the character popped out from the monitor! The character's identity was the wizard Ryan, and his quest is to bring the princess safely to the palace. But Lilac's quest is to get a job! In the end, Ryan accepts the quest from the princess Lilac. Eventually, they entered the dungeon(company) where the monster(company's boss) is crawling. Can Lilac achieve a quest to become a full-time job? And will Ryan prevent the monster's attack to the Princess?

It's Not an Angel

Father Daniel is the new teacher at the Keobiji Muncipality High school, a dump where all the local troublemakers gather. All is well until one night, while on patrol, he sees a woman... beating a man. Sensing something is wrong, he immediately goes to report it the next day. Except that, this woman is not who she seems to be. A strange relationship between a dedicated priest and a hot-blooded troublemaker is about to begin?!?!

One day, she stumbles upon two boyfriends kissing. A strange relationship they had to bear since that day! But even before the shocking incident and the confusion setting in, they were already living under the same roof!

I've lost one of my balls, Now the whole universe is coming after the other one. I must save what I have left!

Jin has closed himself off from reality, satisfied with his life listening to hip hop. But with the help of his friend Don, he rediscovers his passion he’d long forgotten.

My Oppa is an Idol