Mortals of the Doom 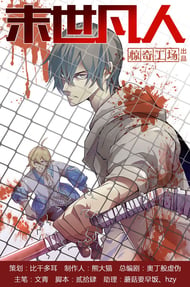 Zuo Tianchen is the last living human in a mutated zombie-infested city. Just when he was sure he'd died, he finds his soul returned to just before that ill-fated day ten years ago. He swears he'll protect the people important to him this time round and reunite with his past lover. Watch his struggles to survive equipped with his memory of the next ten years!

I dropped this manhua after reading 70 chapters, actually I wanted to drop it sooner, but I had decided to go all the way to chapter 70 to see if it could be interesting, and in the end I can say that this manhwa is just garbage. A fact that I was surprised by and of the many positive reviews it has had, and honestly reading this reviews I have not found a single valid reason to continue this manhua, also because honestly giving 10 to this work seems to me almost like praising the shit. Story: the story is quite trivial, but at the same time very cliché when there is a zombie apocalypse, many events were rather obvious and some scenes were poorly managed, from the point of view of writing the story, I would say really bad. The thing I hated the most were the gags, they ruined the serious moments andinstead of making me laugh they just annoyed me, and as regards the serious moments they were not very credible and really badly matched. I can also allow myself to say that history has nothing to offer, because I can already predict that it will follow the same pattern that I have already seen in these chapters: they cultivate, arrive in a place, face enemies, create new allies and end, in short. quite banal and obvious. Art: art is acceptable but in many tables it is really ugly to see, especially for the faces of the characters that were sometimes crooked, in short, nothing special in the end Characters: the most annoying part of this manhwa, Zuo Tian cheng = normal mc of these stories, I don't have much to say about him Luo lansha = simply annoying and unbearable, I was hoping she would die in the first few chapters, but the mc had decided it was better to bring a idiot that does nothing but cause problems. In short, it sucks enough as a character Gao fei = also quite annoying but more bearable than the other, even if the arch dedicated to him, in which he meets his parents, made me not a little spinning, first, for the terrible staging of events, second , for the character who was quite embarrassing during that arc. Enemies =the only really good enemies are the zombies, the humans are all retarded that I don't understand how they managed to survive, until the meeting with the protagonists. Cultivation: I have seen the cultivation of this manhua normal, what is perhaps the only positive note that I would like to give are the various zombies that arise, which were the most interesting aspect of the work. Conclusion: I advise against reading this manhua, and just a waste of time, although I've only read 70 chapters out of 400+, I doubt it gets better, plus there's much, much better out there.

I dropped this at ch.10 once it started introducing supernatural evolution powers. The art is decent, but the characters' expressions seem too exaggerated and the faces too pointy. Their eyes also look sleepy. There is no introduction to the characters, it immediately starts the apocalypse on ch.1. Without some sort of build up I feel little interest in any of the characters. Again, I did drop it pretty early, so the story could get better, but it's a rushed and bad start. I also couldn't get used to the names, they're too different than what I'm used to. That isn't a huge knock against it though, that's more on me.

(No Spoilers)This is like threeway leveling instead of solo leveling Damn just damn, this is a must read if u like zombies and Cultivation.The story is complex and you can almost never predict what is going to hapen next. The characters are just amazing 11/10 if i could. The Art starts of not good but not bad, and then becomes good after some chapters. Overall this is just so good, and is deffinetly on my top 3 Mangas/manhwa/Manhua(sorry for any misspelings or wrong grammars)