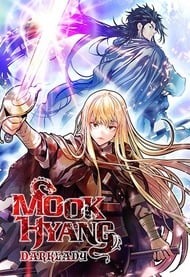 The exceptional martial artist and proud hierarch of the Demonic Sect, Mookhyang, winds up in a strange new fantasy realm after falling victim to a curse cast by his enemies, the Blood Sect. But when Mookhyang’s incredible control over qi, or mana, becomes known, it’s only a matter of time before he gets cursed again… and turned into a young lady?! In this world of elves, mages, knights, and dragons, will a mastery of Chinese martial arts be enough for one man (or woman) to fight his way back home? Or will this humbled warrior finally concede defeat?

EDIT: As of Dec 5 2021, the review has been updated. •••• September 2019 It had so much potential... The theme of Strongest cultivator who gets transported into a western-ish world of swords and magic was great and the art was pretty damn stellar as well. But all came crashing down come chapter 28. The timeskip at the first bit of the story was a bit jarring, but not really much of a deal since we could skip the usual massive info dump and slowly inject it into the story bit by bit. I get that. It's fine. The introduction of Titans didn't bother me much despite them being like medieval gundams. At least we have something to challenge the MC with, right? Yeah. I can roll with that. I've seen worse. Then came the whiny loli character. I was fine with her as well. Brats like her are pretty common in comics (esp in Japanese manga). They usually have their redeeming factors anyway like super strength or demonic bloodline, you know, the works. But then came chapter 28 and everything made sense... although, for the worse. The title was confusing at first but I chalked it up to either getting lost in translation or an additional gender-bender theme similar to Ranma 1/2. Sadly, it was the worst possible version of the latter where he loses all his "cultivation" and turns into a mirror image of the whiny loli with no signs of shifting back into his previous form anytime soon. I love gender-bender and I get character nerfs are necessary for OP MCs. But this was just unnecesary as it was frustrating. Fine, I get it was original but not really my cup of tea. Dropped. •••• December 2021 It's been two years since this review and I've decided to pick this up again just to give it another chance. Not going to lie, I often found myself thinking back from time to time, wondering how this manhwa has been doing (because the art was too good for it to be forgettable). Knowing I had some free time with the holidays, I picked it up again. So I reread it from the start to refresh my memory, and yes, I still found the blonde brat to be annoying, though not as much as I did before since I already knew what I was in for. I admit, I may have been a bit hasty when I shot it down the last time I read it since Dark eventually picked himself up afterwards. Took his sweet time moping around though. Another thing to note is that as much as I hate the blonde brat, she just gets written off, never to be mentioned again for the rest of the story (even until the end of S2). She literally was just a setup character for Dark's hate. I kind of pity the child now. And this may count as a bit of a spoiler but it's important I mention it now because of a point I'll be making later. So basically, the kingdom or whatever that Dark and his troupe have been residing in eventually falls and Dark and the gang gets picked up by--- hey wouldn't you know... The same old fogey who put him through the shitter! And this is where I realized another critical problem with the manhwa. Dark is too passive and is easily swayed. Uncharacteristic of the strongest of the Murim world, Dark gets strung along into one side after another, even losing his consciousness and memory at one point. Okay, okay he's unfamiliar with the world's magic and how things go but come on. Doesn't he learn his lesson after one or two times? I was about to blame the blonde imp (considering what happened to his body) since the stupidity must've been passed onto him but.. no. Dark already had this trait back in the Murim world. He severely underestimates his opponents and suffers heavily for it. And yet he still does the same thing again, none the wiser. Honestly, I think Dark's enemies back in the Murim world did the whole community a solid by removing a wishy-washy man like Dark out of the picture.  So where was I... Oh yes. Another thing that irks me is how easily people accept Dark as their own and vice-versa. You met that man for a few days and suddenly you trust him with your backs? Your leader js just in name now and you're just Dark's circus troupe? Putting it roughly, it surprises me how everyone has survived that long being so easily trusting. It's as if they're teenage adventurers masquerading as battle-hardened mercenaries. Dark has done this as well by readily showing a vulnerability to his technique and exposing himself despite being in a state where he cannot fight back. So much for being set up as "desperate" to go back to the Murim world, he seems more of a man who doesn't give two farts if he just keels over and dies if someone so much as touches his hair while cultivating. So with those issues mentioned and no change of any sort in sight, I eventually reached the end of season two. My conclusions? Art is still stellar as always, the story is still down the crapper, and the characters are even worse than I originally thought. See you in two more years, I guess.

'Review updated'...  ---SPOILERS---STORY: This Manhwa had the potential to be amazing, even though it's an overused theme like 'Isekai' with an overpowered protagonist, there is one thing that sets this apart from other similar stories. The protagonist is already an adult, actually quite old, with his martial arts well developed, his fame already sky-high, and even established a clan of his own. Considering his high age he is already a person with a mindset of decades of experience and not those annoying teenagers from similar stories that go crazy with every thot that shows up in front of them. The story begins in his original world, with various different strong and experienced enemies coming together to deal with the protagonist in the only way they could, which was to use a 'not very known' magic that teleports the target into some random place far and far away from where they live, and it worked. The protagonist is actually thrown into another world. The 1st 'story' problem: Then we get quite a few chapters with him exploring and learning about this new world, he meets some people, he battles some others, and with his experience and knowledge of his martial arts, we see very little effort with him dealing with all the enemies he encountered so far, with this in mind, the author decided to do some of the most stupid (for me at least) ways of making a cool male protagonist weak (chapter 28). One of the enemies he encountered in this world, couldn't deal directly with him so they used a type of curse, which transforms the target into the thing he hates the most, and in that specific situation the protagonist was in, his mind was completely full that he hates kids, especially annoying little girls, and what does he turn into? A weak little girl. So, the author took a cool male, overpowered, and dark protagonist, and transformed into a fragile weak little girl that couldn't even hold a sword. If he at least maintained some of his strength we could have accepted the situation, but no, he was exactly like a fragile little girl only with the mindset of his old self. This was so bizarre that I stopped reading this, and came back just recently (May 2020).The 2nd 'story' problem: It happens again. A few weeks ago I decided to come back to this and give it another try to see if the author had some interesting development. We get a whole saga of the protagonist going from place to place trying to find ways to deal with his curse only to get thrown in his face that the curse he got couldn't be lifted, so he had to live with it. He accepted and started training again. After a while with the protagonist training, he finally starts to reach some small level of power compared to what he had before until we reach a phase when he almost reached his strength before, only for some crazy development to happen (chapter 60), and now the protagonist has a FUCKING AMNESIA!!! The author didn't think that taking his body, martial arts, and all his power was enough, so he decided to take all his knowledge and decades of experience in martial arts too!? Why not just kill the protagonist once and for all, and focus on something else? I have no freaking idea. Honestly, it feels to me that the author hates the protagonist and wants to see him suffer for some reason. Again, I'm taking a break from this story, and I bet I will come back in a few months when things start to go good again, the author will do something to fuck with the protagonist AGAIN. ART: It's perfect for me. The art style of this Manhwa is amazing, fits the genre, the effects are beautiful, the characters are well made. Literally nothing to complain from the art style.Characters: The characters are pretty good, well developed, most have a backstory, or at least a little knowledge about who they are to give us some kind of essence to them, at least the most important ones. Some others do leave a little to be desired, but in the end, they are decent. OVERALL: The art style amazing, pretty good characters, a story with great potential, but the author just has the weirdest choices of characters progression for the protagonist which completely breaks the fun in reading this. EDIT: I came back to read after the "2nd story problem' and I actually understand why the author did what he did, as a form of big character development for the MC, and it was actually something momentary that it didn't take to long to solve. With that said, I have to say the story is getting boring. The MC which was once amazing, with great personality and didn't bow down to anyone, is now accepting to work for the ones that did all this mess with him. I can understand if they solved their issues through some fight and the "enemy" side ask for forgiviness and cooperation with the MC, but nothing like that happened. It's like the author decided to brush it off everything the MC went through so far, and leave at that, while making the MC help them either way.

Wow. One of the rare manga in this genre whose mc isn't a generic stick boy with the personality of a pebble and zero character design, and they turn him into a CHILD. The art is great, characters are likeable, plot is nothing unique, but it's entertaining, BUT THEY TURN HIM INTO A CHILD RIGHT WHEN IT STARTS TO GET GOOD. EXCUSE ME? Finagled. Duped. Ripped off. Bitch u thought. I'm SALTY. This is what I get for not reading the tags. I really had high hopes, jokes on me I guess. I can't believe I got got.